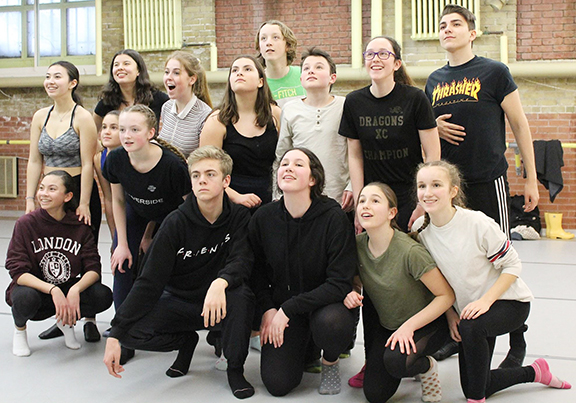 Set in turn of the century New York City, back in the days when newspapers were the main vehicles for circulating news, the musical is based on the real-life Newsboy’s Strike of 1899 when young newspaper sellers banded together as a union to fight the then titans of publishing, Joseph Pulitzer and William Randolf Hearst.

The publishers, facing declining newspaper circulation, raised the price the boys had to pay for each newspaper copy they wanted to sell. The subsequent fight ultimately led to the revision of child labour laws in the city.

Mainstage Theatre Company Artistic Director Alain Richer, now in his 15th Mainstage production, thinks this is a perfect production for the young actors.

“This musical phenomenon has been winning over hearts for almost a decade now, and finally we get to see it on our very own stage! This show speaks to a new generation of musical theatre performers and audiences by bringing a vibrant group of young characters on stage.”

The play’s themes resonate in the modern context of young people mobilizing around climate change, protests around proposed education cuts or the #Me Too movement.

But it is also a high energy, dazzling good time. The show features 12 memorable numbers (including the rousing anthem Seize the Day, and other favourites Carrying the Banner, and King of New York.

The words and music are punctuated with energetic dance sequences, directed by Toronto choreographer Michele Shuster.

“Their movement defines their personalities and their work as newsboys. The show has many dance numbers, including a fan-favourite tap number, but for the majority of the show the choreography takes standard musical theatre jazz dance and mixes it with a whole lot of athleticism to create something that is exciting to watch,” she said.

Kids from all over the city, many from the Beach area, are taking part in Newsies.

Mainstage Theatre Company has a track record of finding and nurturing some of the best young musical artists in the city, and consequently, it’s renowned for the quality of its productions. The cast for each show is selected by audition only.

Newsies will hit the stage at Theatre Passe Muraille, 16 Ryerson Ave., from May 23-26 with five shows including a pair of matinees.

The cast of this production of Newsies will also perform at the Canadian Journalism Foundation Awards Gala on June 13.