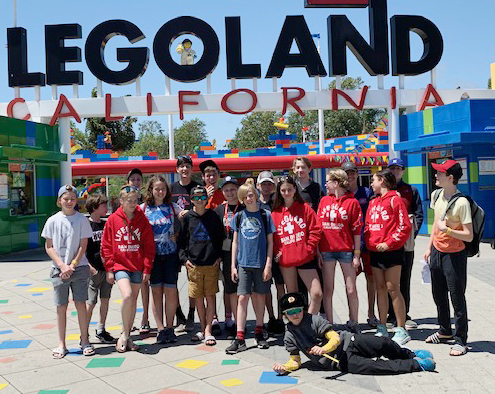 The Guardians of the Galaxsee took on the world in California last weekend, and made history while they were there.

The 10 members of the Glen Ames Senior Public School robotics team, who call themselves the Guardians of the Galaxsee, won first place in the Project Presentation category at the United States FIRST Lego League (FLL) Open Championships in Carlsbad, California on May 17 to 20.

The win came against competition from 70 other teams including representatives from Japan, Korea, Australia, and across North America.

Taking the first place prize in the presentation category made history as it was the first time a Toronto District School Board robotics team won a first in an international competition, said team coach and Glen Ames teacher Luke Martin.

“The Guardians of the Galaxsee are now the top TDSB team of all time,” Martin told Beach Metro News on Tuesday, May 21. “No small feat with some of our legendary teams of the past!”

Glen Ames has been a powerhouse when it comes to robotics competitions in both the TDSB and across Ontario.

This year, the Guardians also won the Toronto and provincial FLL titles which qualified them for the trip to California. It was the third year in a row that a Glen Ames robotics team qualified for the FLL international competition, and the fifth time in the past eight years.

The Guardians team is made of 10 Grade 8 students at Glen Ames. They were the only Ontario public school team who earned the right to take part in the California competition.

Along with the first place win, the Guardians also finished in the Top 8 in Core Values and Project categories – both of which were also the first time a TDSB team had earned such high honours at the FLL international championships.

The FLL is an international alliance between Lego and FIRST (For Inspiration and Recognition of Science and Technology). Each year it presents robotics teams from around the world with a challenge which requires robotics to find a solution.

The teacher coaches of the Glen Ames team are Mr. Martin and Ms. Buckley.

Sponsors of the Guardians of the Galaxsee team include Qualcomm, Slalom, Healthy Planet, Hatch Coding and Acrylic Artisans 2 Inc.