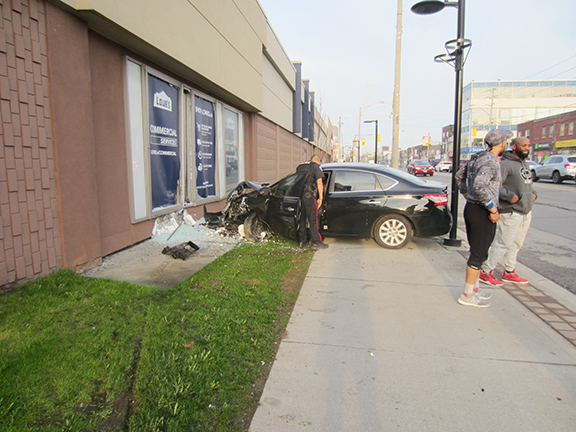 A man and woman suffered minor injuries after this car struck a pole and then the north side wall of the Lowe's store at Shoppers World on Danforth Avenue Friday, May 17, morning. Photo by Mark Ireland.

Two people suffered minor injuries after a driver lost control and a car hit the wall of the Shoppers World Lowe’s on Danforth Avenue.

The single-vehicle crash took place at approximately 7:30 a.m. on Friday, May 17.

According to a witness, a black sedan was heading westbound on Danforth Avenue west of Victoria Park Avenue when the vehicle swerved into the eastbound lanes, struck a light post and then hit the north wall of the Lowe’s store.

The crash smashed two small exterior windows at Lowe’s but the vehicle remained outside the building and the wall did not appear to be damaged.

A female driver and a male passenger suffered minor injuries.