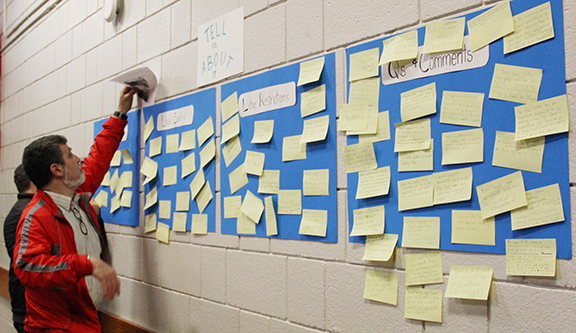 Beaches­­—East York Councillor Brad Bradford hosted a community meeting about the Woodbine Avenue bike lanes recently, and there was no shortage of questions, comments and suggestions from the large crowd of concerned residents in attendance.

The meeting took place on the evening of Wednesday, May 9 at the Stan Wadlow Clubhouse in East York.

The purpose of the meeting, Bradford said, was to explore how the city can make Woodbine Avenue work for everyone—a hot-button issue during the municipal elections last October as those for and against the bike lanes made their feelings known.

Bradford told the crowd of approximately 200 residents at the meeting that he had received hundreds of emails regarding Woodbine Avenue. He said he has received varying perspectives on how to mitigate traffic congestion on the road which is mostly residential.

Bradford said of particular concern to many of those who contacted him was the section of Woodbine Avenue (between Danforth Avenue and Kingston Road) with the bike lanes.

Bradford told residents that he is looking into removing paid parking on Coxwell Avenue during rush hours to open it up as a north/south alternative for drivers frustrated by seeing Woodbine brought down to one lane each way for cars because of the bike lanes. He is also looking into not allowing garbage collection on Woodbine during rush hours, and into adjusting signal timing that, he said, favours east/west traffic.

Bradford said the average delay time on Woodbine Avenue for drives was two minutes and forty-one seconds, which was met by passionate boos from many in the crowd.

A representative from City of Toronto Transportation Staff explained that the city measured the number of cars and travel times during the morning, afternoon and rush hours from March to May, before and after the bike lanes were built.

Some residents complained that the delay time is skewed, because it doesn’t account for the accumulation of snow and winter driving conditions.

During the question and answer period, concerns varied from massive rush-hour traffic delays on Woodbine and pedestrian safety, to lack of education on how to use right-turn lanes and signal delays.

One resident complained of the awkward parking configuration on the avenue, which places the parking lanes in the middle of drivers (on the left) and cyclists (on the right).

Sean Dillon, Manager of Traffic Operations at the city, said that this design ensures the safety of the cyclist and prevents “dooring”.

A resident who lives in the area of Duvernet and Golfview avenues voiced grave concerns for the children who attend the nearby public schools because of the high volume of cars that travel through the intersection and disobey stop signs.

“I’m worried a child will be killed before something is done,” she said, which had residents at the meeting applauding in agreement.

Bradford said he had heard similar complaints for Westlake and Lumsden avenues in East York north of the Danforth.

“People think it’s a highway now,” one resident said of the high volume and speeding cars on Woodbine.

“Give us more radar, give us something,” the resident said.

Bradford responded that he will take the enforcement issues back to Toronto police and work to address them.

Bradford said he will take those issues back to the city’s Traffic Operations to see how they can find a solution.

Dillon added some perspective to the turn restrictions and congestion dilemma, saying that consensus from the community and feedback is often the biggest hold-ups in following through with changes.

Bradford told the residents that he is looking for more feedback, comments and suggestions on how to improve Woodbine Avenue.