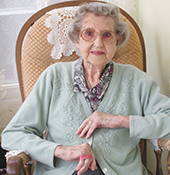 Freda Rout was a long time Beach resident, moving into her Firstbrooke Avenue home in 1960.

You may have seen her quickly walking along the street with her walker, or perhaps you saw her drinking coffee from her personal mug at Tim Hortons. Maybe you greeted her on Firstbrooke Road as she swept her sidewalk, or perhaps you waved to her as she watched the street from her enclosed porch. Sadly, Freda Rout, a long time Beach resident, has passed away.

Freda Elizabeth Rout died on Thursday, April 18 in her 98th year at Michael Garron Hospital, a place that was near and dear to both Freda and her late husband, Jeff.

Freda was born on Sept, 28, 1921 in Northumberland, England. She grew up in difficult times. Great Britain and its allies were recovering from the First World War and soon to be involved in the Second World War.

Freda did her part to help during the war by serving in the Navy, Army and Air Force Institute (NAAFI). She met Jeff, who was a member of the Royal Air Force (RAF), at a dance in Northumberland.

When Jeff saw Freda in her green flowered dress across the dance floor that night, he told his friend that he was going to marry her. They wed on April 8, 1944.

In 1953, they moved to Canada living in several locations in the Beach neighbourhood. In 1960, they bought their house on Firstbrooke Road, where they lived with her parents until their deaths.

Freda was a good seamstress and a wonderful knitter. The owner of a local wool store paid Freda to knit sweaters for his customers.
Jeff, who had been a butcher in England and worked as a custodian for the Toronto District School Board, was very talented at needlepoint. The couple sold their crafts at Norway Public School sales, at Firstbrooke street sales, and in the gift shop at Michael Garron Hospital (formerly Toronto East General Hospital). They donated the proceeds from the sale of their crafts to the hospital. Their generous donations to our local hospital continued throughout their lives and after their deaths.

Freda loved to read, especially works of fiction about life in Great Britain. Writing in her journal was a daily activity for Freda until arthritis in her hands made it too difficult. Over the decades Freda maintained contact with her British friends and family, and her Canadian friends through letter writing and cards. She would purchase her cards for the year and set them up in a monthly filing system so no one was forgotten. During her final days she wrote her last Easter cards to four dear friends in England, one of whom she used to walk to school with as a child.

Freda had a marvellous mind and memory. While in the hospital, the doctor told her that her CT scan showed a brain far healthier than most 65 year olds! She kept her mind busy with word search books and jigsaw puzzles.

Freda was a kind and generous neighbour. Whenever a neighbour tried to give her something like homemade muffins or a turkey dinner, the neighbour never left empty-handed; Freda always had a box of cookies or a bag of candy to give in return for the kindness extended.

Jeff and Freda never owned a car. They preferred to cycle or walk. Freda could be seen walking all over the Beach neighbourhood with her trusty walker that she affectionately called Winnie. Until this past year, she would regularly walk to Coxwell and Gerrard, the Danforth, Queen and even as far as Victoria Park.

Freda was predeceased by her beloved husband, Jeff, in 2012. Freda leaves behind her cousin, John Chisholm, of Devon, England, John’s children, Peter-John (Bridget), David (Jo), Alison (Denis) and Andrew (Jo) and their families. She was recently predeceased by Jeff’s sister, Peg Long of Norfolk, England. She is survived by her niece, Jane Long, and nephews, Jerry (Kerry) Long, Stew (Nona) Long and Rick (Sheena) Long and many great nieces and great nephews.

Even as cancer took its toll, the doctor reported that Freda’s heart was strong. She had a big heart, and shared it with countless people. Her family, friends, and neighbours will hold Freda in their hearts and their memories.

Written by Carole Crompton, a neighbour and friend of Freda.