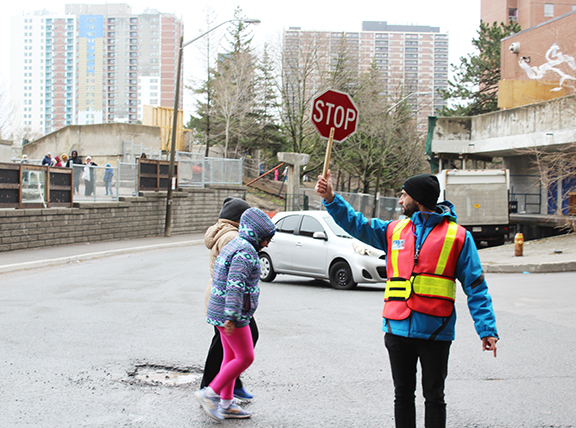 After months of waiting for a pedestrian walkway that collapsed in November of last year to be replaced, a crossing guard has been stationed on Massey Square to help students at Crescent Town Elementary School safely cross between the school and the adjacent apartment buildings.

The new crossing guard, Ozan Ozdogan, began his first shift at the location on the morning of Wednesday, May 1.

In between escorting students and parents safely across the roadway at lunch that day, he commented on the strangeness of the location, which is a private road that separates the school and the apartments in Crescent Town, just west of Victoria Park Avenue north of Danforth Avenue.

“When I first got here this morning, I wouldn’t have believed I would be working in such an odd location,” said Ozdogan, who is an experienced crossing guard. “It’s not really a street but it gets a lot of traffic, and there’s no crosswalk marked. It’s a very populated area.”

And the area’s high population and large number of students crossing Massey Square to and from the school is why Beaches-East York Councillor Brad Bradford pushed for the crossing guard to be assigned to the area in the wake of the bridge collapse. “Changes like this might seem small, but this is an important step forward to help our community become safer for everyone.”

Bradford was also out at the location on Wednesday morning for the crossing guard’s first shift.

Crescent Town Elementary School principal Harpreet Ghuman said the crossing guard was much needed given the high number of pedestrians and vehicles in the area.

“So many people use this area and the bridge being down has caused a lot of concern,” he said. “Having the crossing guard there really helps.”

He said on the first morning of the crossing guard, there were a few drivers confused by being made to stop for pedestrians who were honking.

Ghuman said that there are plans to formally mark the crossing and have signage up in the near future. Bradford’s office confirmed those plans, but a date for when that will happen has not yet been set.

The elevated concrete pedestrian walkway, which was approximately 15 feet high partially collapsed onto the Massey Square road early on the morning of Saturday, Nov. 17, leaving a hole in the bridge and hanging concrete.

The collapsed portion of the walkway was owned by Pinedale Properties.

Since the collapse, the walkway portion has been entirely torn down and only the concrete supports remain.

The TDSB owns a small portion of the walkway that connects to the Crescent Town school yard, but that was not the portion of the bridge that collapsed.

Ghuman said the TDSB and Pinedale are working towards replacing the walkway later this year, but a final date for construction has not been set.