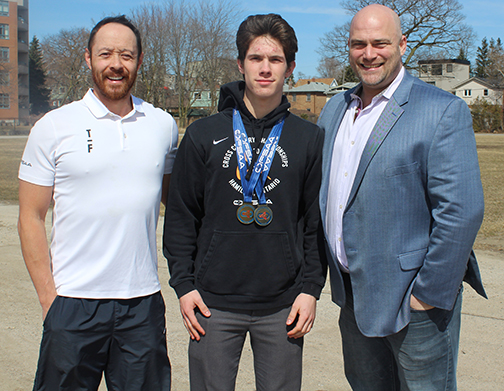 Neil McNeil Catholic High School student Jacob Andress has done something no other athlete from the school has ever done, win Ontario gold medals in two different team sports.

Andress, who is in Grade 11, made sports history at the school when he was a member of Neil McNeil’s Senior boys hockey team which won the gold medal at last month’s Ontario Federation of School Athletic Association (OFSAA) championships.

He added that gold medal to the one he won in the fall of 2017 as a member of the school’s cross country team at the 2017 OFSAA championships.

Cross country and track coach Jason Wood said the school looked into seeing if it had ever had a double-gold medal winning athlete in two different team sports at OFSAA, and they could not find another one.

“He is the only athlete to win a team gold medal with two different sports teams,” explained Wood.

In its 61-year history, Neil McNeil has had athletes who have won more than one gold medal at OFSAA but it has either been as a member of a team in one specific sport or individual medals in sports such as track.

Hockey coach Peter Ranson said cross country running is a great sport for hockey players as it builds both strength and endurance.

“All the sports complement each other, and his fitness level and endurance is very high,” said Ranson of Andress.

This was Andress’ first year as a member of Neil’s Senior boys hockey team, having been on the Junior squad last year as a Grade 10 player.

He said Neil McNeil’s strong sense of team was one of the reasons they won the OFSAA hockey gold this year.

“All of us have known each other and played together and that really helped us,” he said of the hockey team. “It was the chemistry we had that helped us win.”

While hockey is a fast-paced and hard-hitting sport, Andress admitted that cross country running can be the most physically demanding especially once the runners get into high school and the courses become much more challenging and the competition more intense.

“Cross country is a tough sport; very painful,” he said.