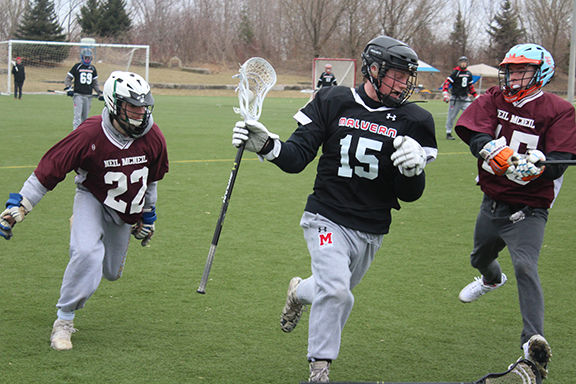 The Toronto Beaches Lacrosse Club hosted its 11th annual Jammer Classic Field Lacrossse Tournament on the weekend of April 5 to 7 at the Cherry Beach playing fields.

Competition took place in high school, U-13, U-15 and U-17 divisions at the tournament which is named in honour of Jamieson Kuhlman, 15, a Beach resident who died in a tragic accident while playing lacrosse as a member of the Beaches club in 2008.

Neil McNeil won that game 7-3 and went to finish in second place in the tournament to champs Upper Canada College.

Games in the tournament’s other divisions were played on Saturday and Sunday.

In the U-13 Division, the host Toronto Beaches team won the championship. They went a perfect 3-0 in tournament play, racking up wins against St. Catharines, Peterborough and Newmarket to take the title.

In the U-15 Division, Mimico won the championship by going a perfect 3-0. The Beaches team finished third, while Whitby was second and Oakville was fourth.

In the U-17 Division, which featured eight teams, Oakville beat Orangeville to win the championship. The Beaches team won the consolation final.

For more on the Toronto Beaches Lacrosse Club, please see our earlier story at https://beachmetro.com/2019/04/04/toronto-beaches-lacrosse-club-opens-season-with-this-weekends-11th-annual-jammer-classic-tournament/