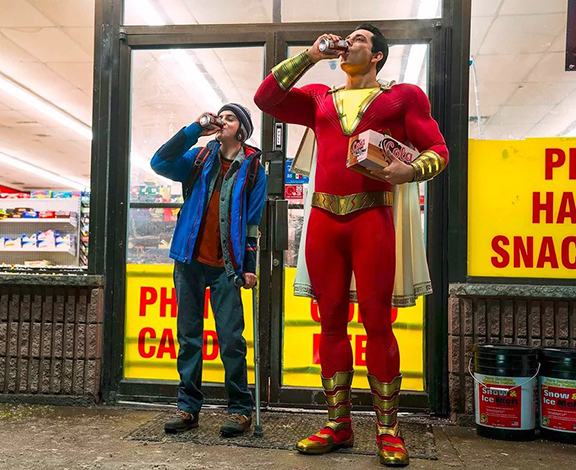 Shazam, which was filmed in Toronto and features numerous local locations including Danforth Collegiate, Greenwood subway station and Warden Woods, opens today. Inset photo shows a home on Lyall Avenue which was a location in the movie.

When I was growing up in the Beach it was a great adventure to play in the Glen Stewart Ravine or ride bikes up to the mysterious Warden Woods (north of the Danforth off Pharmacy Avenue).

The big world out there seemed ripe for exploring, though there were scary rumours of a “Bush Gang”.

Billy Batson (Asher Angel) is a street-wise 14-year-old who is placed in a foster home with a diverse group of adorable kids including Freddy (Jack Dylan Grazer from It) who has a disability. It’s Christmas and Billy goes looking for his birth mom at a well-decorated home on Lyall Avenue. You may recognize their school as Danforth Collegiate. Bullies attack Freddy, and Billy comes to his foster brother’s rescue.

Billy is chased to the nearby Greenwood station. He escapes on the subway and meets a wizard who grants him superpowers.

Who knew the TTC has magical subway trains? Some of the “biggest” stars in the movie are TTC trains. As well as the unused lower Bay station, we see an eastbound train go by as Billy searches for his mom near Warden Woods.

It’s fun to try and spot the Toronto locations including the old Hearn Generating Plant where Billy tries out his new powers. Can he fly? With great power comes great responsibility.

Oops, the first thing he does in his adult body is buy beer!

Shazam was filmed here last year in the dead of winter often outside on the coldest nights. It’s more a coming-of-age comedy with extra cheese than a dark, action film.

Levy has described it as “Big meets Superman”, a throwback to the wish-fulfillment adventures of 1980s movies like The Goonies, Stand By Me and Back to the Future. There is a nostalgia for simpler times when kids had a lot of freedom and only worried about being home in time for dinner.

Last year’s hit horror film It was about a group of friends who dubbed themselves the “Losers’ Club” and rode bikes to “the Barrens” (actually the Rouge Valley in Scarborough). The Losers also got in fights with bullies…and, oh yeah, a clown. The sequel It: Chapter Two comes out in September.

This wasn’t the first time a superhero showed up in a Scarborough park. The Incredible Hulk fought armies at Morningside Park, while X-Men and Pixels used Rouge Park.

Shazam is the original Captain Marvel story which debuted in comic books almost 80 years ago and was the first superhero set to film in a 1941 serial.

Escapist movies are popular these days. There are villains and bullies out there, but it is reassuring to know (spoiler alert) that the heroes always win. If only it were that way in real life.

The good news is spring is here at last. Earth Day (April 22) is just around the corner. Studies have shown that being outside helps with our mood and even our eyesight.

It’s time to get out and enjoy the great outdoors. Instead of taking kids to a movie, try a walk in nature.

There’s no superhero flying above Warden Woods, but there is a dog park and hiking trails. The Rouge Valley is a beautiful wilderness close to the city. That’s a real adventure. Don’t come home until you get hungry!