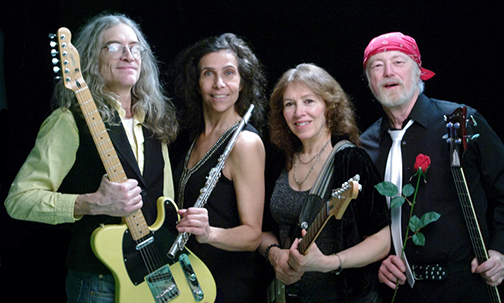 “We’re delighted and excited to have The Two Fours on board,” said Beach Metro News’ Advertising Manager Mark Ireland.

The Easter parade in the Beach has been a local institution for more than 50 years.

According to Andre Buhot, the club’s Secretary and Past President, The Toronto Beaches Lions Club Easter Parade is the largest and longest running Easter Parade in the world. Started as a Centennial project in 1967, it was routed along the Boardwalk for its first seven years.

The Beaches Lions Club became actively involved in 1973, and the next year the parade moved to Queen Street East. By 1981, the Lions had become the parade’s official organizer.

The Two Fours are excited about appearing in this year’s parade, which will take place on the afternoon of Easter Sunday, April 21.

“All our ‘core four’ members have lived in the Beaches for decades,” said bassist/vocalist and co-founder Wally Hucker, “and brought our kids to the parade year after year. It is a true harbinger of spring.

“We have all enjoyed raising families in this neighbourhood, which has given us so much joy, and we like giving back.”

“And,” added Hucker, “there’s the fun and challenge of dealing with the weather vagaries of an outdoor gig, plus the added excitement of playing on a moving vehicle. That is definitely a first for all of us.”

All ‘core four’ sing lead and harmony vocals. They will be joined by their regular drummer, Paul Brennan, formerly with Big Sugar, Sarah McLachlan, and Alannah Myles.

In addition to their community contributions, The Two Fours numerous club appearances have included many venues in Toronto’s east end. The have played 10 times at Black Swan Tavern, as well as at Balmy Beach Club, Hi-Lo Bar & Grill, The Duke Live, Saulter Street Brewery, Firkin On Danforth, The Feathers, Relish Bar & Grill, Rorschach Brewing Co., and many others.

Salty Dog’s Roots & Rockabilly Supercharged Sundays matinees run from 4 to 7 p.m., and this Sunday features The Two Fours’ renditions of rocking classics from the recent and distant past. There is no cover charge.