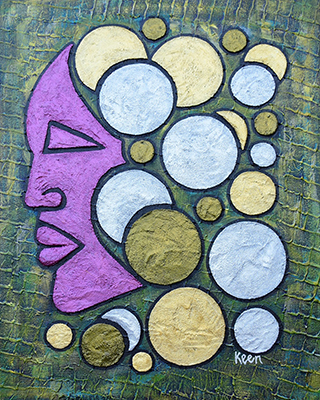 The Saulter Street Stairwell Gallery at Ralph Thornton Community Centre will be hosting creations from local artist Sheryl A. Keen until the middle of April.

The exhibit, Daring to Defy the Status Quo of our Minds, opened in early March and will continue until Sunday, April 14 at 765 Queen St. E. The show feature 15 of Keen’s original art works.

Keen’s style of painting consists of semi-abstract pieces mainly created with acrylics. For this, she uses a technique that stacks modeling paste which creates a 3D effect.

In an interview with Beach Metro News, Keen explained that her passion for creating art has been with her since she was born.

“I don’t think people become artists,” Keen said. “I think there are people who are born artists, and I was one of them.”

The artist has been featured in a number of solo exhibitions including Station Gallery 2018, A Different Booklist 2017, and at Knowledge bookstore 2017.

Her piece called Brainstorm has also been accepted into the Ontario Legislature’s A La Carte Artist Program to be shown for a year.

When asked about the inspiration behind her art, Keen said that she tries to illustrate pieces where people can become a better version of themselves. For this exhibit, Keen added that she wanted the focus to be on ‘thinking of bigger ideas and changing the status quo’.

“People can expect to think more about themselves and their minds,” she explained. “They’ll wonder how to diversify their thinking and how to achieve their best self.”

Keen added that her journey in life tends to reflect in her work. While being a multi-dimensional person, Keen said her work and artistic themes change as she does.

“I became an artist to tell stories,” she added. “I create art to get people thinking and start conversations, and possibility to even change the world a little bit.”

More about Keen and her work can be found on her website at www.sherylkeen.com