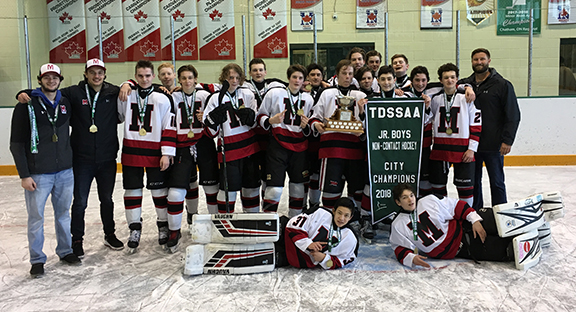 The Malvern Collegiate Junior boys hockey team won the city championship this week in with a shootout victory over Northern Secondary School.

The game ended tied 3-3 after regulation time, and after three periods of sudden-death overtime it went to a shootout.

With three shooters per team set for the shootout, Northern was up first and scored on their first attempt.

Comebacks were the name of the game for Malvern in the contest as the Black Knights twice battled back from deficits three times, including being down by two goals heading into the third period.

Northern opened the scoring in the game, but it was quickly tied up by Malvern’s Sam Parks.

Northern then went up 3-1 to end the second period, but before the Black Knights mounted their comeback.

Nic Reaume scored early in the third to bring Malvern within one, and Quinn Plaxton tied it up with three minutes left in regulation time with a nice end-to-end rush.

The city championship game was a rematch of the Malvern Winter Classic outdoor game played in late February at Kew Gardens between the Malvern and Northern Juniors. That game also went to a shootout, which Malvern won 3-2.