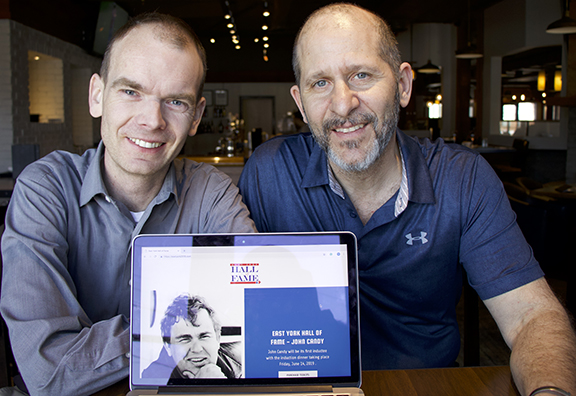 Home is where the heart is – and for East Yorkers, the newly established hall of fame could be that place of comfort.

Whether someone lived there, grew up there, or just studied there, the East York Hall of Fame is ready to award their achievements.

Justin Van Dette, president of the East York Hall of Fame Association was blown away by the amount of community spirit when he walked out of a similar hall of fame induction event two years ago. That gave him the idea to start his own hall of fame in East York, with 13 other members, to honour people that deserve to be in the spotlight.

“It’s a friendly reminder for us to remember our upbringings, give back and in a very strong, proud, local way,” he said.

To honour the contributions of a remarkable comedian and actor, the late John Candy will be the first inductee of the East York Hall of Fame on Friday, June 14.

Positive conversations have taken place for the hall of fame to potentially be located at East York Community Centre on Pape Avenue. Regardless of the hall location, the induction dinner will take place at The Fort on Danforth Avenue and tickets are priced at $75.

“There’s certainly no one better to honor as our first inductee than John Candy,” Van Dette said.

Candy grew up in East York and attended Holy Cross Catholic Elementary School on Donlands Avenue. Van Dette believes that inducting him will create a pathway for “something more significant in our community named after him.”

Mayor of Toronto, John Tory, will be attending the event as not only the mayor but to share his personal story with Candy from the early 1990s. When Candy was the co-owner of the Toronto Argonauts, Tory was the Commissioner of the Canadian Football League.

Michael ‘Pinball’ Clemons, who played for the Toronto Argonauts, will also be there and speaking at the event.

Candy’s son and daughter, Chris, and Jennifer Candy are also thrilled to be attending the event to commemorate their dad.

To make the date more memorable, Van Dette’s association has been lining up the talent of potential guest speakers, of which Sandie Ronaldo, anchor of CTV national news who had fond memories of working closely with Candy, will be the master of ceremonies.

Also, the Grey Cup – the Canadian Football League championship trophy – will be on display at the East York Hall of Fame induction ceremony.

The future looks bright for the East York Hall of Fame as it aims to recognize five individuals on an annual basis.

As Van Dette has a strong feeling of affection towards East York, he wants to make sure that people who grew up there or attained education from there are remember and recognized in the “long term and forever,” through the East York Hall of Fame.

“We want to make sure that people not only remember who they are today but in 100 years from now,” he said.

For more on the East York Hall of Fame and to order tickets to the induction ceremony in June, please visit https://eastyork2018.com