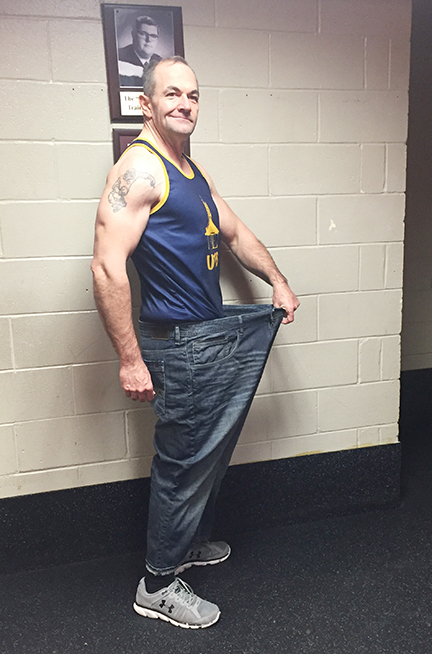 As many New Year’s resolutions start to wane, Rick Honeyford’s weight loss journey is an inspiration.

Honeyford was an active athlete in his university days, playing rugby during the summer for the Balmy Beach Club. He played in the prop position and the more you weighed, the better.

But when his playing days ended, he gradually put on weight over the next 20 years, reaching almost 400 pounds.

“Getting my driver’s licence was the worst for me,” he commented. “It made the drive-through way too accessible.”

Busy building his career as a mortgage agent and financial planner, Honeyford visited fast food outlets twice a day and he wasn’t doing much cooking or exercising.

Honeyford wasn’t exactly sure how much weight he had gained as most scales only went up to 325 pounds. But, he tipped the scale at exactly 385 pounds when he went for a sleep apnea test.

He was told at the sleep clinic he would need a machine to breathe at night because of his weight. “When I went to sleep, I was literally drowning in my own fat.”

That sober realization was the motivation he needed to make a change. It was 2016 and he was 42 years old.
Honeyford said losing the first 50 pounds was relatively effortless.

“I was still doing the drive-through and eating Big Mac’s but I cut out the french fries, the high-calorie soda pops and the McFlurries.”

Saying goodbye to french fries was a good start but the pace of his weight loss soon slowed.

Honeyford tried numerous diets but the real turning point was when he started to go to the gym at the Balmy Beach Club.

At first, Honeyford went twice a week but as he got more motivated, he hit the gym daily.

At one point he was losing a half a pound a day. His friends were bringing him clothes as his size was dropping so quickly.

“I realized diet alone does not work. You have to exercise regularly to gain lean muscle mass.”
Honeyford now weighs 197 pounds and describes himself as a “gym rat”.

He also spends a lot more time preparing his own food and he has learned to read food labels.

Today, Honeyford is an active volunteer as the Balmy Beach Club Rugby team manager responsible for administration, game sheets, equipment, etc… He has won the annual section award for outstanding volunteer contributions the last two years in a row.

“Rick has always been an asset to The Balmy Beach rugby section but achieving his fitness goals has given him the confidence to play again after a hiatus, as well as being an advocate for our community,” said rugby executive member, Lisa De Sario.

“We are proud of all his accomplishments.”

His advice to others who want to lose weight is to make exercise a priority.

“Put it in your schedule: Would you skip a meeting with a big client if you were tired?”

Honeyford says anyone can lose weight and get in shape, but there is no magic pill.

As he reflects on his journey, Honeyford said he was inspired by a quote by the Dali Lama: “Man sacrifices his health to make money. Then he sacrifices money to recuperate his health.”

Honeyford does not go through the drive-through anymore.