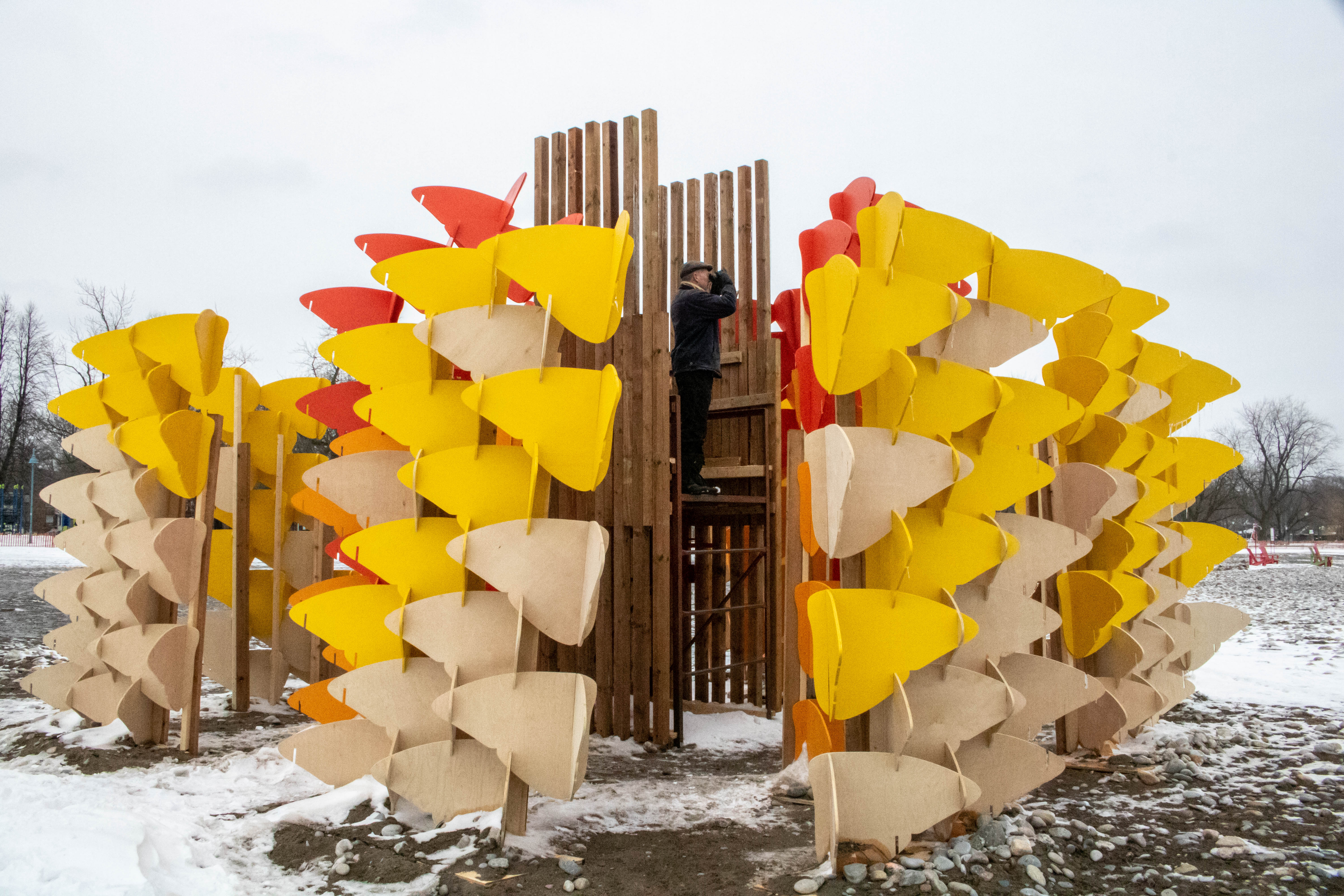 The Forest of Butterflies, by Luis Hernandez of Xalapa, Mexico, is one of the six Winter Stations art installations now on display on Woodbine Beach.

It is an amazing fact how nature can bring people from different countries together on a single theme – the Monarch butterfly.

Let me preface this article by saying I know very little about birds, insects, animals and absolutely nothing about plants, trees and vegetation. I only know about some people who have become experts in their particular fields of nature study.

I am writing about the Monarch butterfly, or in this case one of the foremost scientific experts on it.

I was down on Woodbine Beach a little while ago to look at and admire the different sculptures of Winter Stations and their themes at the same time Mayor John Tory, Beaches-East York Councillor Brad Bradford, and former councillor Mary-Margaret McMahon were there for the official opening.

I was looking at the first sculpture and it intrigued me as it was done by an artist from Mexico and it was about the Monarch butterfly.

Luis Enrique Hernandez of Xalapa, Mexico was the artist and it was titled The Forest of Butterflies in recognition of Michoacan in Mexico where the Monarchs winter.

Luis explained in his mind the long trek of the Monarch is in his opinion one of the longest migrations in the world.

While speaking to Luis we were of the same mind that these butterflies bring our two countries together regardless of political differences. This is due to our appreciation of the Monarch and other things.

After speaking to Luis, I asked him if he knew about the person who “banded” the Monarch Butterfly, Toronto’s Professor Fred Urquhart. He said he had heard of him but didn’t know much about him.

I then thought to myself here is this marvellous exhibit depicting the Monarch butterfly in the original area where the idea came to Urquhart as young boy.

For those who do not know the story of Urquhart, he was a teacher who with his wife Norah was mainly responsible for studying the migratory habits of the Monarch butterfly.

He and his wife travelled the world following these beautiful creatures and studying them for many, many years.

He became involved with those who were like-minded with he and his wife, and together with these dozens of naturalists managed to find out the hundreds and hundreds of miles these butterflies went in their migration by banding them.

This is a very short version of it because it would take a couple of hundred pages to describe their methods. Simply, Urquhart and Norah would get dozens of Monarchs, put a little band on them and let them fly to other places all the way down to Mexico.

With the help of the like-minded naturalists they were able to find many of these butterflies by this method and see the different routes they took.

This is just a simple version. In reality it took many years of painstaking research by Urquhart and his fellow naturalists to check the flights of the Monarch.

In the end they persevered and thanks to them for a job well done. There have been several articles and books written by nature scholars on Urquhart and the Monarchs, but this is just to tell you about the young boy Fred.
Going back to the foot of Woodbine Avenue, we go to the era where young minds develop.

In this case, young Fred Uquhart. He was a boy who grew up in this neighbourhood and went to the Kew Beach school just up the street.

This area was part of a gigantic marsh called Ashbridges Bay and in this section where we are in and Fred got his start in learning about insects, birds, frogs etc…was called Raines’ Pond, later part of it to be known as Pantry Park.

Young Fred developed an interest in nature at an early age with the help of one of his teachers who noticed the young lad had a special interest in it. She helped him out by explaining as much as she could in this area populated by creatures of the wild.

Let this be a lesson to all of you children: Keep at whatever you see you are good at and have an interest in because this is what Fred did.

He would go to this dream place of a pond day after day and study everything that he could. He read a lot on these subjects with the help of his teacher.

Fred never forgot his origins of nature and he worked very hard to keep an interest in his home. In fact, as we see later, young Fred went on in life and through university and became one of the world’s most proficient scientists on not only the Monarch butterfly but numerous other species as well.

Remember, Fred was a Beacher. He grew up here and went to school here. Later with his wife, he made history by tracking the migration of the Monarchs.

Now this is not the end of the story, but dear readers think of what one person has accomplished; the ability to correspond with people from all over the globe about the Monarch butterfly that has fascinated so many millions of people.

And why? Because ladies and gentlemen, boys and girls, this man had a dream and a purpose in his life and he and his wife achieved it.