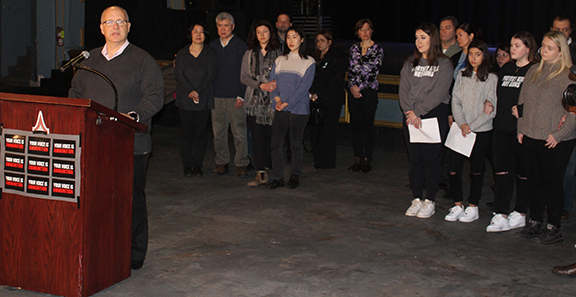 Ken Price speaks at the podium during a press conference held by family members and victims of the Danforth shooting.

A Parliamentary petition calling for the banning of the private ownership of handguns in Canada has been renewed and is still available for to be signed by those who wish to do so.

Ken Price, whose daughter Samantha was among the 13 injured in the Danforth shooting on July 22 last year which took the lives of Malvern Collegiate grad Reese Fallon, 18, and Markham’s Julianna Kozis, 10, let the Beach Metro News know this week that the renewed petition can be accessed by visiting https://----escape_sem_autolink_uri:6646d0e7e831a7dfbd96d98147302405----

Fallon was out with a group of friends on the evening of July 22 celebrating the 18th birthday of her friend Noor Samiei and they were eating ice cream in a crowded Alexander the Great Parkette when a man began shooting.

Police flooded the area and briefly exchanged gunfire with shooter Faisal Hussain, who shortly afterwards turned his gun on himself and took his own life.

That gun, a .40 calibre handgun, was originally owned legally and stolen a number of years ago in Saskatchewan.

Family members and victims of the shooting held an emotional press conference on Feb. 22 to mark the seven-month anniversary of the shooting and to call for the ban on the private ownership of handguns in Canada.

The renewal of the Parliamentary petition is part of the process, Price told the Beach Metro News in an interview on March 8.

“We want to have people go to triggerchange.ca and to sign the petition,” he said.

Price added that support for the ban is coming from across the country, and gave the example of Toronto’s Dr. Najma Ahmed who is part of Canadian Doctors for Protection from Guns which was formed last month.

Ahmed, a trauma surgeon at St. Michael’s Hospital, treated some of the victims of the Danforth shooting.

Price also discussed a Globe and Mail story that Dr. Ahmed has drawn the ire of the Canadian Coalition for Firearm Rights, an organization that says it speaks for Canadian owners. According to the Globe story on March 7, Ahmed was being told to “stay in your lane” and professional complaints were being made against her as a result of her involvement with Canadian Doctors for Protection from Guns.

The phrase  “stay in your lane” has often been used by the National Rifle Association in the United States who are critical of doctors trying to make gun violence a public health issue, said the Globe and Mail story. Basically, the NRA is telling the doctors that it is outside their professional mandate to take a position on gun control, said the story.

Price said he’s not surprised by the reaction from the gun lobby groups in both Canada and the U.S. to those calling for stronger gun control laws.

“A lot of the strategy is to try and deflect and say that this is not your issue,” he said.

“It’s an attempt to change the channel.”

However, as Price pointed out, when the system of legal gun ownership falls apart and weapons end up in the hands of criminals the results are fatal.