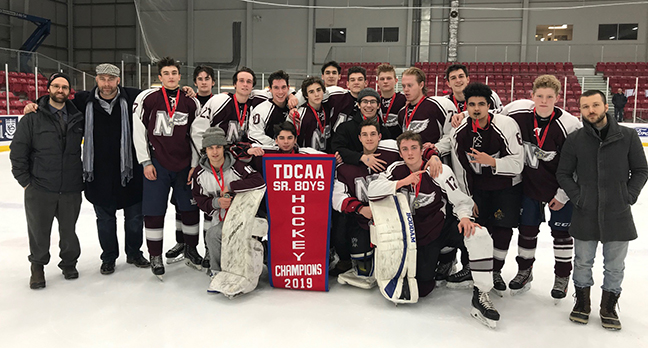 The Neil McNeil Catholic High School boys Senior hockey team is heading to the Ontario championships for the second time in the last three years.

The team qualified for the Ontario Federation of School Athletic Associations (OFSAA) championships by winning the City of Toronto title for Catholic schools last week.

The Neil McNeil boys did not lose a game all season in league and exhibition play and capped that perfect run with a 3-0 win over Bishop Allen Academy of North York in the Toronto District Catholic (Colleges) Athletic Association (TDCAA) championship game played on March 1 at the Mastercard Centre in Etobicoke.

Coach Peter Ranson said the team members had set a goal at the start of the season to aim for an undefeated record and he was happy they were able to achieve it with a 20-0 finish.

Goalie Christian Senarega earned the shut out for Neil McNeil in the city championship game.

“He’s played in three championship games for us and won them all by shut outs,” said Ranson of his goalie.

Senarega, in Grade 12, played in two previous city championships while a member of the Neil McNeil Junior boys hockey teams when he was in Grade 9 and Grade 10.

Neil McNeil’s Junior boys team also won the TDCSAA championship this year, but do not advance any further as OFSAA competition in hockey is only for Senior teams. The Neil McNeil Juniors have been city champs for the past four years.

“We started building the Junior program six years ago and it now feeds a strong Senior program,” said Ranson.

It also provides the Senior team with players who are used to winning championships and expect to do well and have success.

Ranson said along with the Senior and Junior boys teams, Neil McNeil also has a non-contact hockey team which also competes in a league.

“It’s important to give kids an outlet and an opportunity to play hockey and gain experience,” he said.

Neil McNeil’s last trip to the OFSAA hockey championships was in 2017. They were one of two local teams representing Toronto that year as the Malvern Collegiate team was also at that OFSAA as the Toronto District School Board champs.

This year’s OFSAA AAA championships, which is the highest level, will be played in Barrie from March 20 to 22. Representing the TDSB at this year’s OFSAA is Lawrence Park Collegiate.

Sixteen teams will be taking part and Ranson is hoping that Neil McNeil will be among the top-seeded teams given their perfect record on the season. Seeding for the tournament has yet to been released.

Ranson is cautiously optimistic heading into OFSAA that the Neil McNeil team will put in a strong showing. He pointed out that in exhibitions games this season, Neil McNeil beat both Waterdown and St. Theresa of Richmond Hill, who are in this year’s OFSAA.

“We’re happy to be representing the community and are very proud of the boys,” he said.

Along with the strong goaltending of Senarega, the team also looks to leadership from Joe Cane, Joe O’Keefe and Owen Porter, said Ranson.