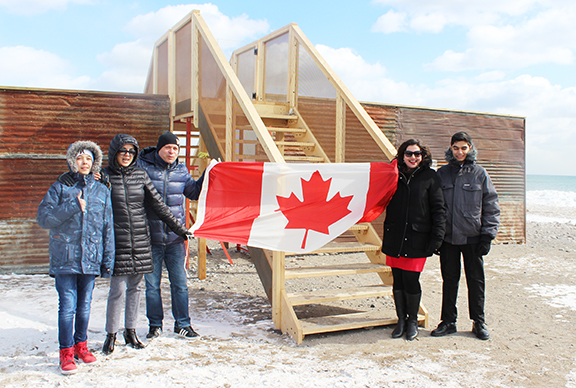 New Canadian citizens including Patrick and Marinela Anghel and Cheryl Oliveira celebrated in front of the Winter Stations art installation Above The Wall on Wednesday at Woodbine Beach. Photo by Alan Shackleton.

Canada welcomed 27 of its newest citizens during a special ceremony held at the Kew Beach Lawn Bowling Club at the foot of Lee Avenue on the morning of Wednesday, March 6.

The event was tied in to the Winter Stations art installations exhibit now on at Woodbine Beach, and after being sworn in as citizens a number of the new Canadians took in a walking tour along the beach of the artworks.

Winter Stations co-founder Roland Rom Colthoff was at the citizenship ceremony and said that this year’s theme of Migration was especially relevant for those who were making the journey to become Canadians.

“Winter Stations is a uniquely Canadian event meant to celebrate winter here in one of the special places of our country,” he told the new citizens.

On a day that was sunny but very cold with strong winds blowing in over Lake Ontario and ice floes piled high on the shoreline, Colthoff commented on the placement of the art installations in “a forbidding and spectacular landscape here on the Beach in winter.”

Erskine-Smith pointed out that more than half of Toronto’s population is made up of people who were not born in Canada, and that immigration plays a key part in not only the city’s success but also Canada’s.

“We’ve built a country based on shared values such as liberty, tolerance and mutual respect and we now include you,” he said.

Bradford spoke of how Toronto is a city of strong neighbourhoods and urged the new citizens to get involved in their communities and share their cultural heritage with others. “We would not be the same city without our shared cultural traditions,” he said.

Celebrating their new Canadian citizenship on Wednesday morning were Marinela Anghel and her son Patrick, 14, from Romania.

“I’m so happy to be here,” said Patrick. “It’s a lot of opportunity and a nice place to find out what I am going to be.”

The family is from Brampton, but have often visited the Beach in the summer months and were pleased to have the ceremony at the Kew Beach Lawn Bowling Club.