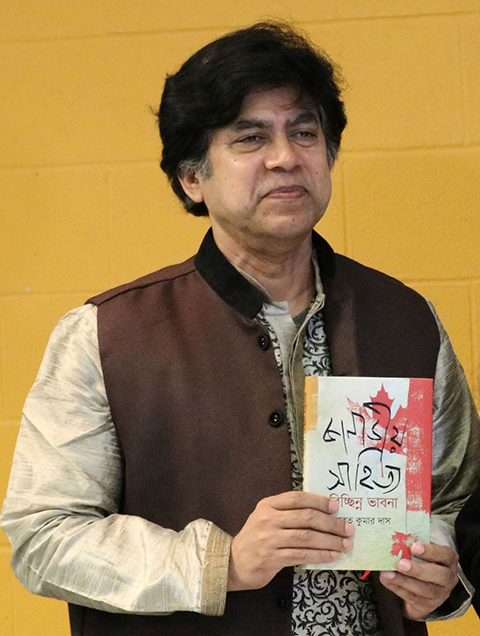 A local Bangladeshi writer recently held a book launch at the Birchmount Community Centre for his new work on Canadian literature.

Subrata Kumar Das was welcomed by several poets at the launch for his new book Kanadiyo Sahityo: Bichchhinno Vabna, translated to Canadian Literature: Some Snapshots. The launch took place on Sunday, Feb. 3.

Das had the book published in his hometown Dhaka, Bangladesh by the well-known publishing house Murdhonyo, and he eventually brought 120 copies to Toronto.

Das currently works at the Bengali Literary Resource Centre as the executive director. However, his knowledge for writing a book on literature stemmed from his educational history.

Das grew up studying a variety of literature in school. He found himself always drawn to the subject, and eventually became a literary teacher.

“Whenever I would read or teach literature, I felt that it was my duty and responsibility to let people know what literature is about and help people get introduced to it,” Das said.

He also added that he only arrived in Canada as of August 2013, but continued his passion for writing here. Although his first initial thoughts weren’t to write about Canadian literature, the idea flourished with the more time he spent learning about the country.

In addition, Das wanted people like himself to have an easier time understanding Canadian literature since it is not well-known in Bangladesh.

“In the four years I’ve been studying, I’ve learned that there are so many gems in Canadian literature which are unknown to Bengalis,” he said.

“I wanted to let our community and our people know about Canadian literature, and I had developed a confidence in my knowledge which led to the book.”

The Bangladesh-born writer also added that he has written 26 books before this. His past pieces, however, range from poetry to history on other Bengali works. This is the first time Das has bridged Canadian and Bengali literatures, but he doesn’t plan for it to be the last.

“My next book will definitely be on Canadian literature but I will focus on particular issues and who influenced them. It will be in English,” Das added.

One of the attendees at the launch in February included Toronto Poet Laureate Anne Michales who spoke highly of Das for his publication.

In a press release, Michales stated, “I, as the representative of Toronto and on behalf of Canada’s multicultural literary community, would congratulate Subrata.”

Another attendee of the launch, poet Iqbal Hasan added that the title of the book means much more than it leads on.

“Subrata’s selection of topics in the book must not be mistaken as random choices from its title because he has well thought out design in presenting them in the benefits of his readers,” Hasan said.

Das is currently in the process of translating books on English literature for the Bengali communities, in addition to working on his next book.

“Canadian literature is very vast,” Das explained. “It takes a lot to get into it and understand it, but readers can appreciate it with the right patience.”