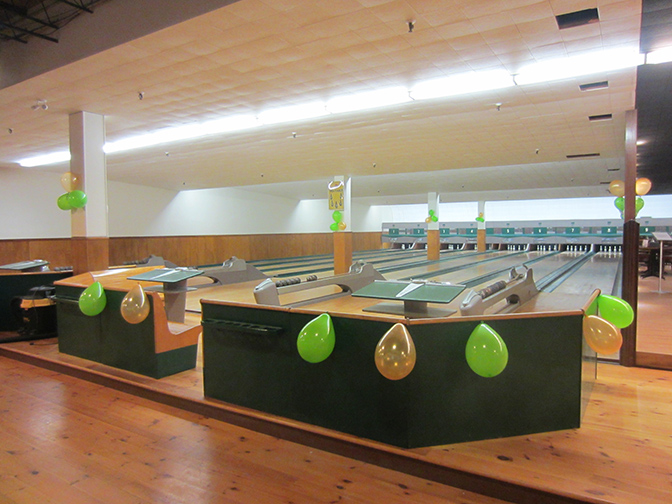 The Shamrock Bowl and Restobar celebrates its grand reopening on Feb. 28.

One of the most well-known and historic bowling alleys in east Toronto is reopening for the community to enjoy.

The Shamrock Bowl is now known as the Shamrock Bowl and RestoBar, and is back with lots of exciting features. The retro five-pin bowling alley, located at 280 Coxwell Ave. near Gerrard Street East,  is set to officially open on Thursday, Feb. 28.

Axel Binneboese, the managing director at Shamrock Bowl, explained that local residents were adamant on getting the bowling alley reopened.

“Everyone knows the place because they came with their grandads and grandmas,” Binneboese said. “There’s a huge following, and there was a big community push to get this place operating again.”

The bowling alley was originally built in the Shamrock Hotel in the late 1940s, where the owner at the time had a bar called Underworld in the basement. Residents of the community didn’t appreciate the bar, and requested for a more family-friendly feature in the hotel. This is when the Shamrock Bowl came in, where it was known as one of the only five-pin alleys in Canada at the time.

The classic bowling centre’s recent transformation has added on a polished restaurant bar and a music-filled nightclub on the weekends.

Binneboese said that the three-in-one space provides something for everyone to experience.

“We wanted to create a concept for the community that gives life to this overall business,” he said.

One of the changes that were made was shortening the 12 bowling lanes to 8. This helped to make room for the restaurant bar that now serves unique European-styled dishes for customers. In addition, there is now a bar and lounge area that is featured on Friday and Saturday nights from 11 p.m. to 2:30 a.m.

Along with the bowling, the Shamrock Bowl features arcade games, billiards, and foosball tables.

When asked what people can expect at the reopening, Binneboese said that customers will appreciate the vintage feel.

“They can expect to bowl like it was in 1953,” he said. “It’s a connection to an era gone by since there’s no computers and no technology.”

The Shamrock Bowl presents no computerized scoreboards, and has manual pin-setting equipment and ball-retrieving machines.

“There’s so many memories of people growing up here playing this sport,” he said.

“Bowling is a social sport and you don’t need a massive amount of skills to play it. You just need to be willing to have fun, and I think that’s why this place connects people to that feeling.”

More information on the Shamrock Bowl hours, events and features can be found at https://www.shamrockbowlandrestobar.com