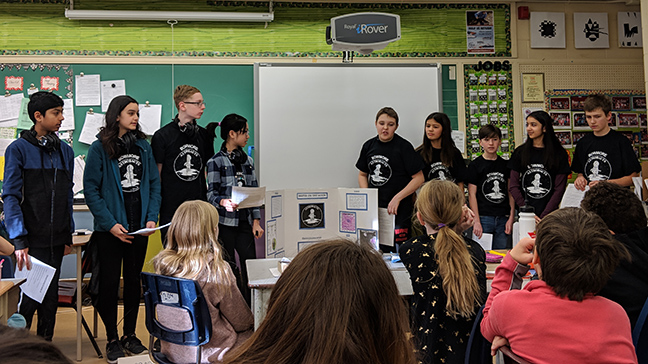 The team, which calls itself The Astrobauts, earned the trip to the Jan. 12 Ontario championships by finishing in the top five at an FLL competition held by the Toronto District School Board at Runnymede Collegiate Institute on Dec. 8.

Thirty teams took part in that competition in December, and the Astrobauts were second overall.

At the Runnymede competition, teams were asked to do three things: present a project that they came up with that helps astronauts in space overcome a physical or social problem; create a Lego robot and program it to do the related space missions on a game board; and do a teamwork-based challenge assigned by the judges and present it.

After all of this, the judges chose five teams to move on to January’s provincial championships. The Astrobauts team made up of Grade 7 and 8 students won second overall for all TDB teams at the city competition.

They are one of two teams where Bowmore students are represented. The other team is made up of Grade 4, 5 and 6 students: The Guardians Of The Galaxy.

The challenge for the 2018-19 FLL season was Into Orbit, and it asked students to deal with an issue in outer space that needed a solution.

The Astrobauts identified the need for easy access to water while in space, and came up a system for extracting water from the moon. They called it the LOW method: Lunar Obtaining of Water.

At the provincial championships in Oshawa, the Astrobauts had to present their project, robot and then complete a core values challenge. The judges were impressed by the Bowmore students’ knowledge of Lego building techniques and execution of them, and their code.

The Astrobauts final presentation was core values. The students were asked to build a device out of Lego and use it to move marbles from one container to the next. They were very successful at this challenge.

The Astrobauts said they had tons of fun at the provincials. They are proud they made it to the provincials as a top TDSB team, and enjoyed a great day learning and friendship.

The Cube’s Team No Signal

The Cube Design and Technology School’s Team No Signal were pleased with their performance at the recent FIRST Lego League (FLL) provincial championships.

The competition took place at Durham College in Oshawa on Jan. 12 and saw top robotics teams from across Ontario take part. While Team No Signal did not advance the provincials, the team members were proud to have competed and enjoyed the experience.

“Not many teams make it to provincials and we really thought it was a great opportunity,” said team member and Grade 7 student Zora Sabharwal Lakhera.

“Our team placed seventh in the robot run and although we didn’t make it, we had lots of fun. The competition was really large and we put in our best effort. All the team members were nervous for the big day, but when we got there we gave it our all and did our best. We are all ready for next season and this time there is going to be nothing holding us back. We learned from our experiences and are going to improve big time and make it to worlds next year for sure!”

The Cube School is at 2195 Gerrard St. E. and it offers students a number of after-school and extracurricular technology programs.