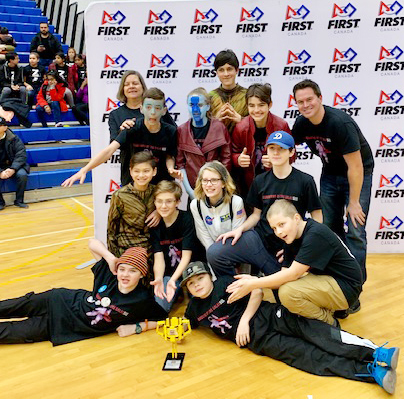 The Glen Ames Senior Public School robotics team, the Guardians of the Galaxsee, at the provincial championships in Oshawa recently. Photo: Submitted.

Students at Glen Ames Senior Public School are continuing their remarkable run of success in robotics by qualifying to compete internationally this May in California.

The school’s robotics team, which calls itself the Guardians of the Galaxsee, consists of 10 Grade 8 students.

They compete as a team in the FIRST (For Inspiration and Recognition of Science and Technology) Lego League, known as the FLL, which holds local, provincial and international championships for school teams to take part in.

This is the third year in a row that a Glen Ames team has qualified for the international championships, and the fifth time in the past eight years.

The Guardians earned the right to attend the Carlsbad, California competition on May 17 to 19 by virtue of their strong showing at the FLL provincial championships last month at Durham College in Oshawa where they finished second overall.

Glen Ames is also the only Ontario public school that earned the right to compete internationally for this year, which makes them especially proud, said coach and teacher Luke Martin.

The FLL is an international alliance between Lego and FIRST. The challenge for the 2018-19 FLL season was Into Orbit, and it asked students to think like engineers and scientists facing an issue in outer space that needed a solution.

Clearly the Guardians’ solution was well received by the provincial judges as they were one of only two teams chosen to present their project in front of the entire audience at Durham College, said coach Martin.

Along with heading to California, the Guardians will also be taking part in the Ontario Innovation Celebration (OIC) on Feb. 24 at Seneca College’s Markham Campus.

Glen Ames is one of 18 teams from across the province to take part in the OIC event, which they won last year with their project The Walking Lead.

This will be the fourth annual OIC, and there’s more at stake than just the honour of winning as the top three teams at the event will be allowed to represent Ontario in the Global Innovation Award competition. The winner of the Global competition receives $20,000 to make their innovation a reality.

The teacher coaches of the Glen Ames team are Martin and Ms. Buckley. Student members of the team are Grace, Robin, Finn, Sasha, Shane, Ben, Ethan, Adam, Tommy and Thomas.