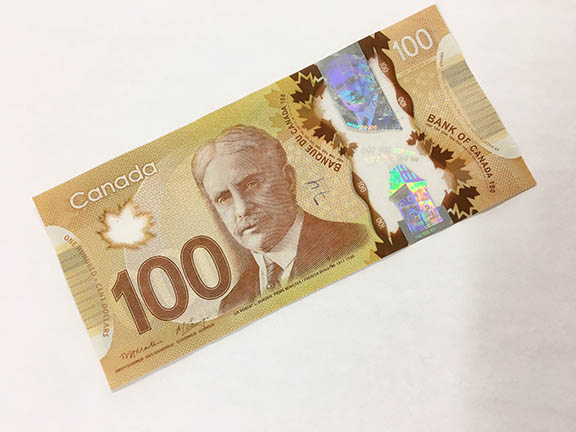 Police in 55 Division are warning residents and merchants to be vigilant after a number of counterfeit bills, including at least two $100 bills, have been seized recently.

Toronto police are asking residents to be vigilant after counterfeit bills were seized in the area early this month.

“We are currently investigating reports of counterfeit bills being passed to businesses in the area and are asking all store employees to be vigilant when accepting large bills and examine each one thoroughly,” Det. Const. Francis Yung of 55 Division’s Fraud Office said.

And, on Feb. 12, the Ontario Provincial Police issued a warning after several counterfeit $20 bills were spotted in Leamington, ON. However, these bills were more noticeably counterfeit because of large Chinese lettering printed on each side.

Residents are encouraged to learn how to spot counterfeit currency via The Bank of Canada’s (BOC) website.

Most counterfeits enter circulation at a retail point of sale. Polymer notes have leading-edge security features that are easy to check and hard to counterfeit, according to the BOC website.

In November, the Bank of Canada issued the new vertical $10 bill featuring the portrait of social justice icon Viola Desmond.

Below is a link to identify the security features in the new bank note: