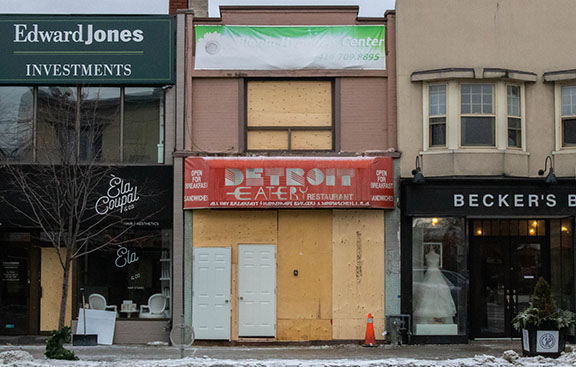 A fundraiser to help the owners of the Detroit Eatery is set for Friday, Feb. 1 at Louis Cifer Brew Works on Danforth Avenue. Photo by Rushanthi Kesunathan.

Detroit Eatery was the first place long-time Danforth Avenue area resident and business owner Keiley Routledge went for breakfast when she moved to the community 30 years ago.

Routledge, owner of Small Wonder Pets, said her heart broke when she heard about the four-alarm fire, which engulfed the well-known diner on Danforth Avenue and Chester Avenue on Tuesday, Jan. 22.

While no one was hurt, Toronto Fire crews spent hours trying to control the fire that also caused businesses beside it to close. It’s believed the fire started in the basement of the diner, at approximately 6:45 a.m., according to Toronto Fire.

Routledge was home that morning, waiting for a veterinarian to visit, when she saw the news about the fire.

“The diner is a pillar in our community,” Routledge said.

To many, the diner isn’t just a business, it is part of their family. It’s everyone’s go to place for breakfast or lunch, even to casually pop in and say ‘Hi’ without eating anything, she said.

When Routledge’s children were in grade school, the diner was the only place they could walk to for lunch. She knew her children would be safe and taken care of there.

“They’ve watched my daughter grow up,” Routledge said. “As an adult she goes there now to hang out.”

That’s what the Danforth community is, we’re more like a village in the city, she said.

It’s not just her children who find the diner a safe place for kids, but many other families in the neighbourhood as well. And now a lot of those kids are adults and some of them with children of their own go to the diner and the cycle repeats itself, she said.

Owners of the Detroit Eatery, the Antaras family, have been so generous to their neighbours. Every year, the diner hosts a Christmas party for the neighbourhood, Routledge said.

So each year, during the Taste of the Danforth festival, people from the neighbourhood will help the Antaras family with their souvlaki booth and not expect to get paid, Routledge said.

For 29-year-old Danforth resident Vito Morelli, Detroit Eatery was a favourite place to hang out. The diner is his social centre; a place he’s been going to since his ninth birthday and it is where he’s celebrated many special occasions.

Morelli was at the diner less than 24 hours prior to the fire. He was on a bus at 7 a.m. heading to work when he heard of the fire.

Owners, Chris and Alex Antaras are an extended family so he didn’t have to think twice to set up a GoFundMe page to help them.

“There was a couple of seconds of being confused and then understanding. It hit me and that’s when I immediately thought about getting a fundraiser going for these guys to make it a little less tough,” Morelli said.

The fundraiser has had an incredible showering of support from people locally and across the city, surpassing its initial goal of $15,000 and raising more than $24,000 since.

“This is what a community does,” Morelli said. “When you have a neighbour, friend, or a loved one in need, you call to action. You try to do your best to make sure the impact of what’s happened is reduced on them as little as possible.”

Painted in the red and white colours of the Detroit Red Wings, wherever you looked in the diner was special and unique to many of its visitors, who have included Prime Minister Justin Trudeau, the late Gord Downie of Tragically Hip, and former Detroit Red Wings player Kris Draper who brought the Stanley Cup for a visit to the restaurant.

The loss of the memorabilia the Antaras family has collected cannot be replaced, Routledge said. The diner was also their income, the whole family worked there – which is part of the reason for the GoFundMe page, she said.

“We hope as a neighbourhood that they rebuild, we would love to see them back on the Danforth,” she said.

Another fundraiser has been organized for Friday, Feb. 1, starting at 7 p.m. at Louis Cifer Brew Works at 417 Danforth Ave.