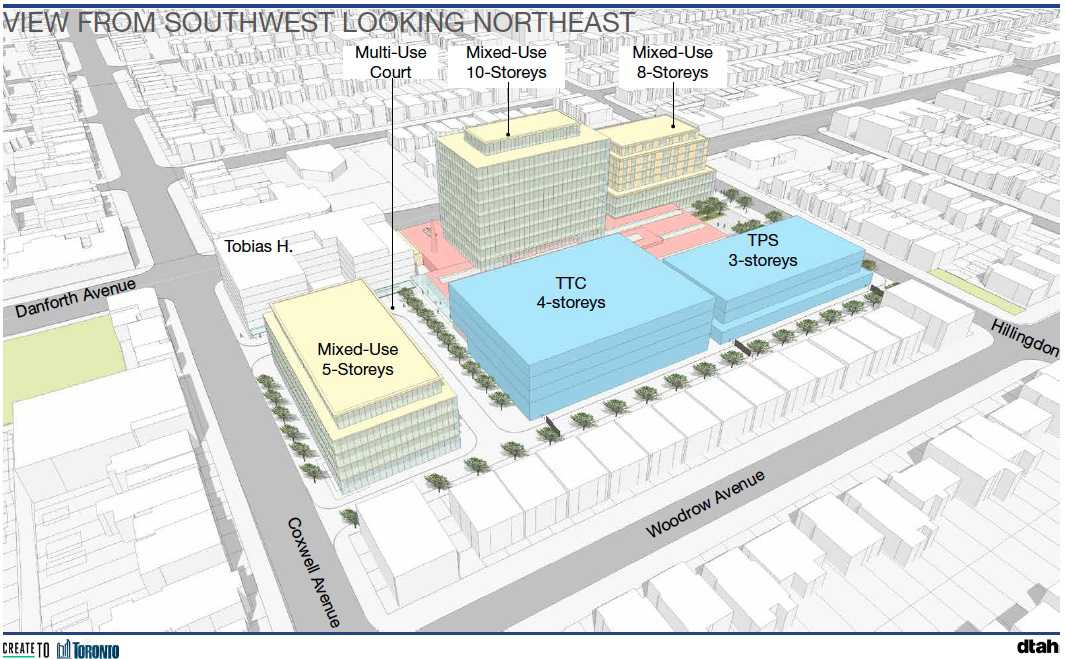 The plan for the redesign of the Danforth Garage site at Coxwell and Danforth will see the area separated into three zones -- including library space fronting Danforth Avenue and a new headquarters for Toronto police's 55 Division.

The third and final Danforth Garage Community meeting took place at Monarch Park Collegiate on Thursday, Dec. 13 and residents were presented with the preferred Master Plan design for the site, located at Coxwell and Danforth avenues.

In the second meeting, residents who attended were given a choice between three potential options (A, B and C) for the future redesign of the site.

According to the community feedback gathered by CreateTO, the City of Toronto agency responsible for facilitating the creation of the Master Plan, resident feedback in the second meeting was a strong preference for the Toronto Public Library to serve as the frontage of the property, a concern about the absence of visitor parking, universal accessibility, continuous engagement during construction with residents of the Tobias House and a collective interest in affordable and accessible residential development on the site.

Architect Megan Torza of DTAH revealed community preference was ultimately a mixture of options A and C, which revolved primarily around having the Toronto Public Library facing Danforth Avenue, a range of architectural expression throughout the space, a continuous driveway to connect all users to the southern edge of the garage and new underground parking spots on the site.

“The local community was purposeful and thoughtful with their comments,” said Gabriella Sicheri of CreateTO.

“Constructive and collective feedback made for a better final product,” she added.

The preferred Master Plan is divided into three zones. Zone 1, facing Danforth Avenue, Zone 2, the central portion of the site and Zones 3a and 3b, which make up the south portion.

Plans for pedestrian-friendly green spaces are to be constructed on outskirts and throughout the redesigned site. Also, adaptive re-use of the Danforth barns will “ensure that the integrity of the site’s cultural heritage value and attributes will be retained,” according to the Master Plan report.

Once the community feedback from the third meeting is collected, the next phase will involve consultations with community leaders, stakeholders and environmental and transportation services before CreateTO presents the Master Plan Final Report to Toronto Council in March of 2019.

If approved, residents should expect to see construction begin next year with the police and TTC offices being built first and expected to be completed by 2022.

New tenants will be selected with the goal of returning the site as more of a use for the community, said Daniel Woolfson, Senior Planner at City of Toronto. Future tenants of the property have not yet been chosen.

In the meantime, residents have until Thursday, Dec. 20 to submit feedback on the Final Master Plan at www.danforthgarage.com

For a story on the second Danforth Garage site meeting, go to beachmetro.com/2018/11/01/deadline-nears-for-input-on-plans-for-danforth-garage-redevelopment