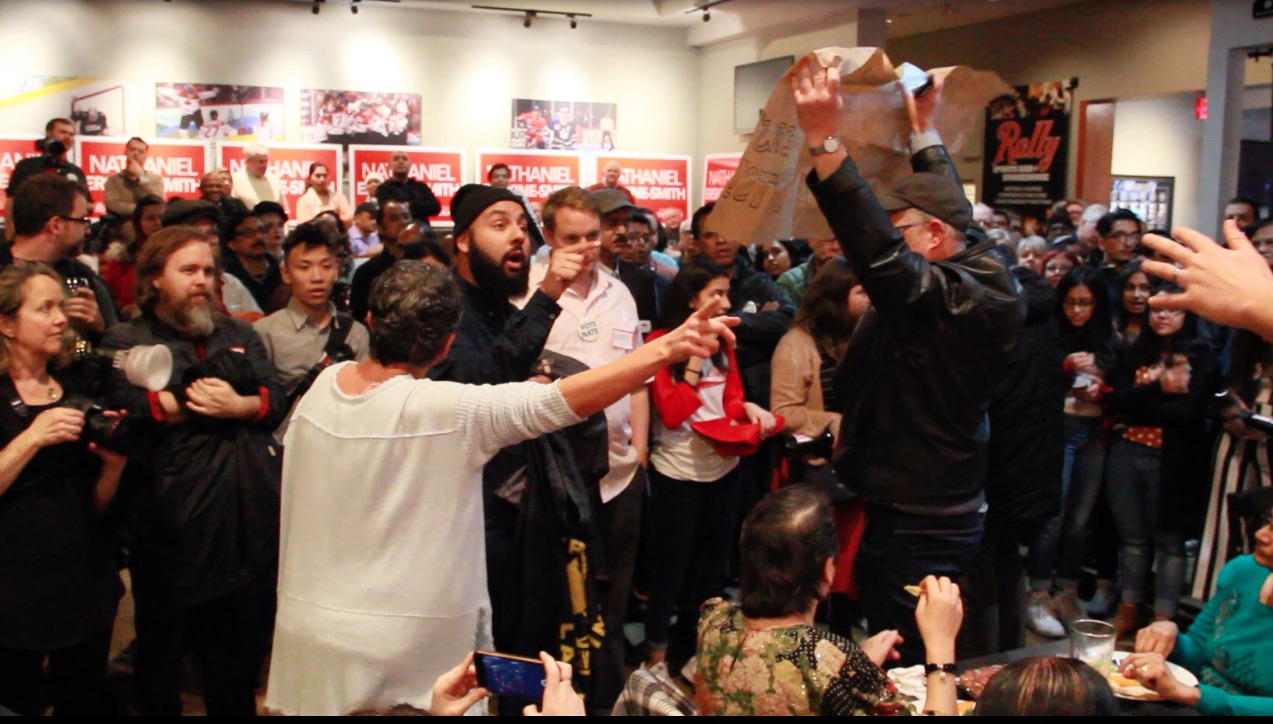 Protesters angry with the treatment of Canada Post workers by the Liberal government made their feelings known at the nomination party for Beaches-East York MP Nathaniel Erskine-Smith on Sunday afternoon. Photo by Nina Rafeek

The approximately one dozen protesters on behalf of postal workers briefly took over the event at Rally’s Sports Bar on Dec. 2 to voice their displeasure with the Liberal government’s decision to legislate Canada Post employees back to work.

Shortly after Erskine-Smith began his speech, protesters already standing in the crowd, interrupted with chants and protests.

“It’s our right to bargain fairly, you stripped us of that,” one protester yelled.

“You sent us back into unsafe working conditions, because you voted for it,” another one shouted.

Erskine-Smith explained to the angry protesters that the arbitrator is required to consider “specific principles” which include, health and safety of workers and equal pay for equal work. He said that if that language was not in the legislation or if was not a fair bargaining process for the workers and Canada Post, he would not support it.

Tensions got high as protesters shouted, “Shame on you,” while equally passionate supporters of Erskine-Smith cheered, “Four more years”.

Beach Metro News reached out to the Toronto division of the Canadian Union of Postal Workers, but could not confirm if the protesters were unionized postal workers, although one protester did speak of unsafe and “treacherous” delivery routes north of O’Connor at the rally.

Another protester confirmed by phone that he is a member of the Communist Party of Canada, who was there to support Canada Post employees and every worker’s right to strike.

Erskine-Smith offered to speak with them after the rally, but he told Beach Metro News that the protesters did not stick around to take him up on his offer.

“I have corresponded with local postal workers in a very respectful way. I felt that it was a very positive event except for the brief interruption,” he said.

After the protesters left, Erskine-Smith reiterated his plan to continue the work he and his team have been doing for the last four years.

The three issues he highlighted were climate change, reconciliation with Indigenous peoples and poverty at the otherwise cheerful and positive Sunday afternoon event.

Volunteers and supporters congregated at the O’Connor and Victoria Park sports bar for the “Team Trudeau nomination event” on behalf of Erskine-Smith, who was nominated as the Liberal candidate for Beaches—East York in next year’s federal election.