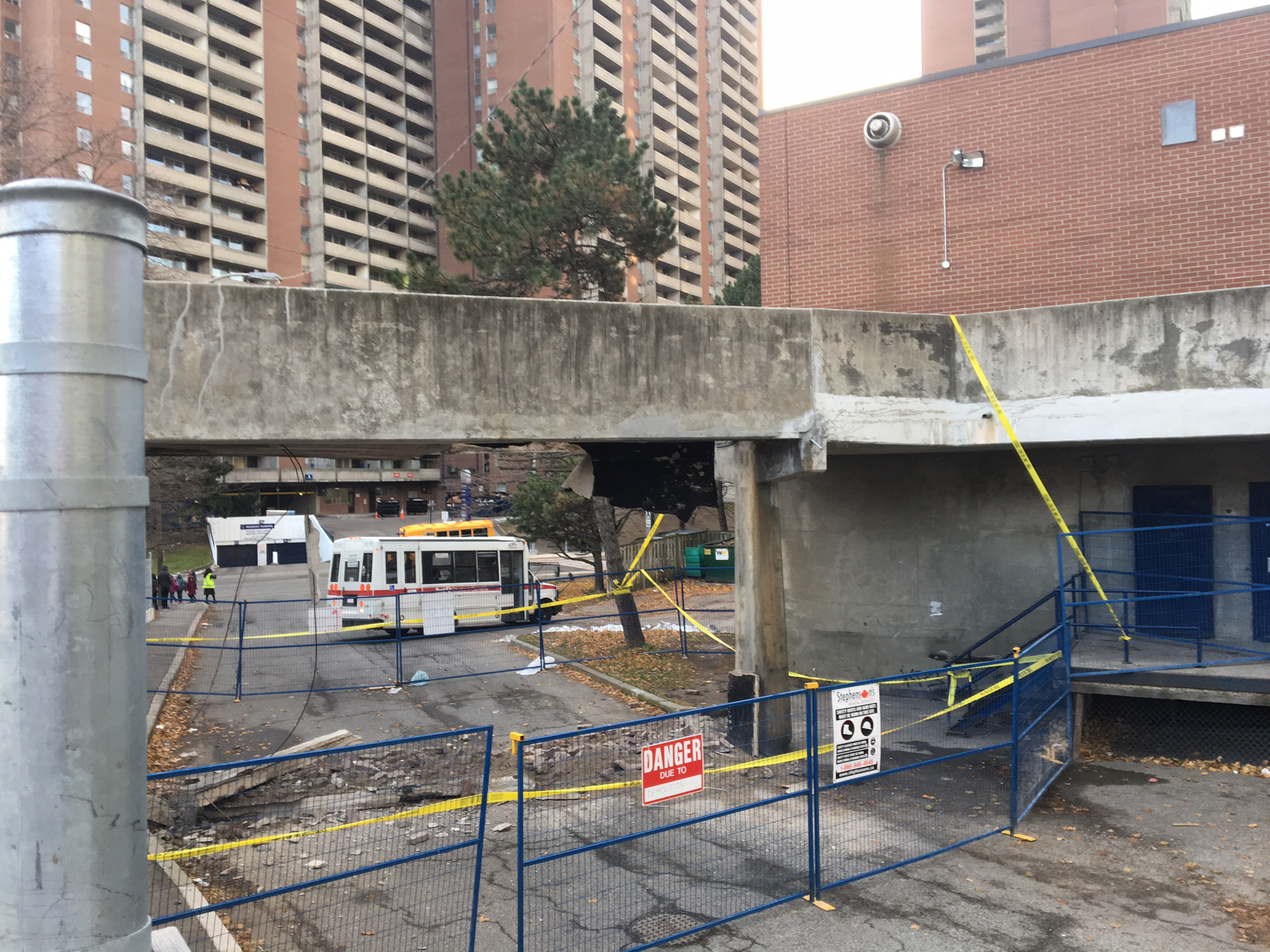 The walkway connecting apartment buildings to Crescent Town Elementary School partially collapsed on Nov. 17, leaving the bridge and the roadway under it closed off. Photo by Alan Shackleton

The collapse of an elevated concrete pedestrian walkway in Crescent Town has meant major inconveniences for local elementary school students and area residents.

A portion of the approximately 15-foot high outdoor walkway’s floor collapsed onto Massey Square road early on the morning of Saturday, Nov. 17, leaving a hole in the bridge and hanging concrete.

No one was injured by falling concrete in the incident, but the walkway which connects apartments in the area to the school yard is now closed and awaiting repair.

The walkway was well used by residents, and its closure is having a big impact on residents of the many apartment buildings in the Crescent Town Road and Massey Square area, just northwest of Victoria Park and Danforth avenues.

“It’s really inconveniencing me,” said Afroza Sultana, who lives in an apartment building right beside the walkway and uses it to get her children to Crescent Town Road for their morning school bus.

“Now we have to go all the way through the school yard,” she said.

Crescent Town Elementary School and the Toronto District School Board had extra staff out in the yard and at the entrance to the walkway on the board’s property to direct parents and children through the school yard and make sure everyone was safe.

“Extra staff is redirecting them through the school to appropriate bus pick up locations,” said Crescent Town principal Harpreet Ghuman, who was one of many school staff members outside on Monday morning wearing bright safety vests.

Along with Crescent Town’s own students, many other students used the walkway to get to their buses for Duke of Connaught, Selwyn and Cliffside schools.

The TDSB owns a small portion of the walkway that connects to the Crescent Town school yard, but that was not the portion of the bridge that collapsed.

The collapsed walkway portion is owned by Pinedale Properties.

“We can confirm a failing early in the morning of November 17, 2018 of a pedestrian bridge within the Crescent Town neighbourhood.  There were no reports of any injuries following the partial collapse of the structure,” said Danny Roth, spokesperson for Pinedale Properties, in an email statement sent to the Beach Metro News on Monday morning.

“The pedestrian bridge is jointly owned and maintained by Pinedale Properties and the Toronto District School Board (‘TDSB’).  The point of the failure occurred in a location under Pinedale’s care, and as such, we are cooperating fully with investigations into the incident and are responding on an immediate and urgent basis. Following the incident, the pedestrian bridge was assessed by a structural engineer who determined that the structure must now be replaced.  Efforts towards the demolition and ultimate replacement of the pedestrian bridge are ongoing. While the pedestrian bridge remains closed, Pinedale will continue to provide a guard to escort children across the Massey Square Driveway to ensure safe access to the Crescent Town School,” the statement said.

It’s estimated that upwards of a thousand trips were made each weekday across the bridge when students, parents, and other residents are factored in.