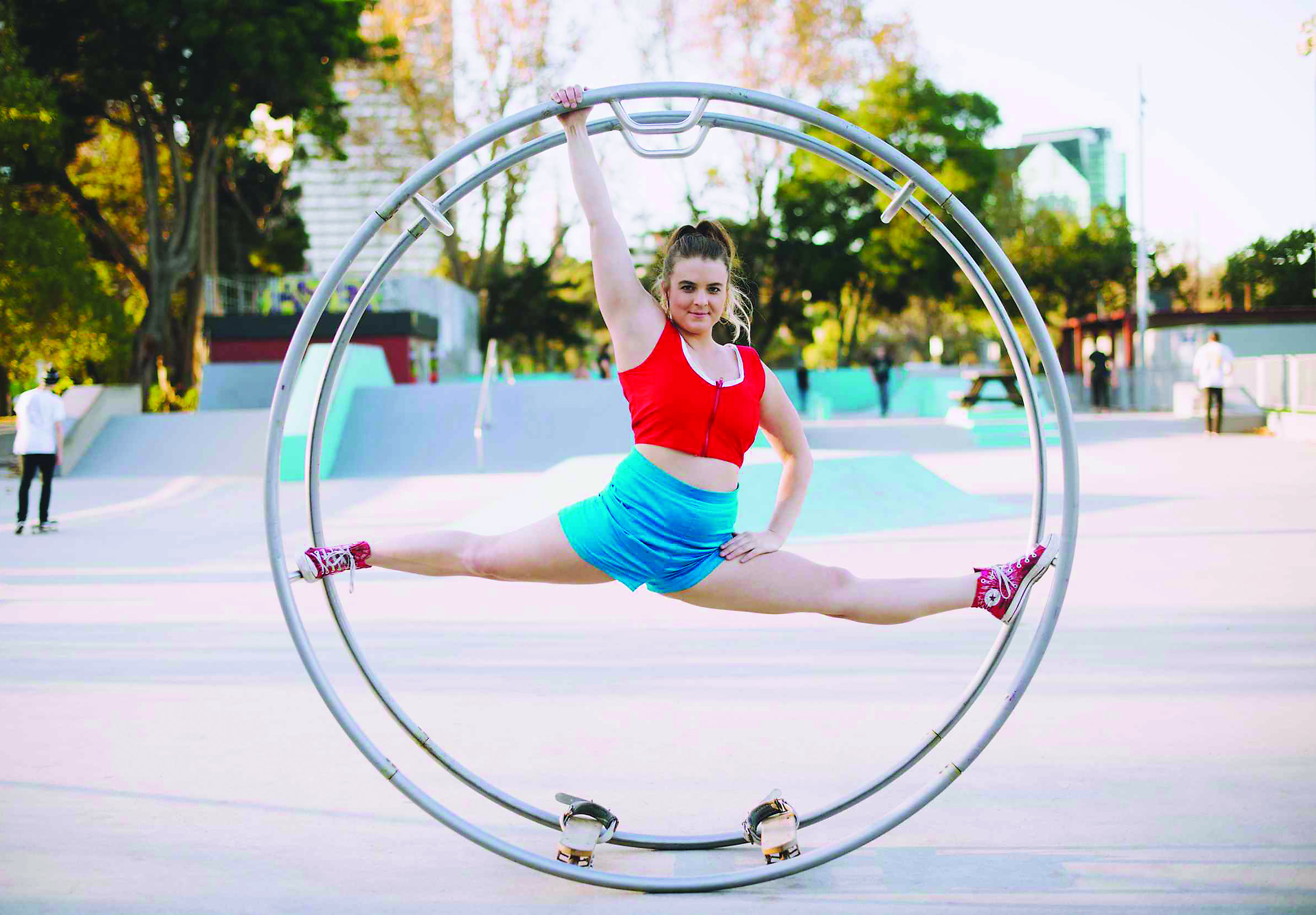 Hannah can literally run rings around people as she contorts, rolls and spins through big wheels. A grad of Australia’s National Institute of Circus Arts, Hannah has become a fixture on the Canadian street performing circuit where she has collected a bagful of awards. PHOTO: CONTRIBUTED

The Toronto International BuskerFest is back in the Beach at Woodbine Park for the Labour Day weekend, and appears to be settling in as a local fixture that neatly bookends the summer with the Jazz Festival.

The open-air event, which brings in street performers from around the world, is by far the largest of its type in Canada and a heavy hitter on the international festival circuit, too.

When BuskerFest made its debut in 2000 at Nathan Phillips Square, the 25 performers drew a crowd of around 25,000. Last year’s edition, held in Woodbine Park, saw about 150,000. This year BuskerFest aims to have 200,000 people at the park to take in the more than 100 performers, many of which are twists on traditional circus acts such as jugglers, acrobats, magicians and contortionists.

For an arts festival, BuskerFest has an unusual history: It was started by Epilepsy Toronto, a charity that supports people with epilepsy and their families through a wide range of programs. It is the only major such festival in the world started, organized and run by a community charity, says Melanie Carrey, BuskerFest
communications coordinator at Epilepsy Toronto.

And it’s been something of a nomadic event in Toronto, too. From Nathan Phillips Square, it moved to the St. Lawrence Market area in 2003, and after outgrowing the neighbourhood, migrated to the Yonge Street strip in 2013. Three years later it moved to its new home in the Beach.

Epilepsy Toronto executive director Geoff Bobb has been enthusiastic about the Woodbine Park location. “The Beach is the ideal home for BuskerFest; family oriented, oozing with character, and a long-time champion of the arts,” adding that the large open spaces provide a better view of the shows and the park location reduces the chance that children could get lost in congested streets.

That helps contribute to a less harried, and more relaxed vibe, Bobb said. The festival has always drawn from acts that perform globally, earning their livings through street performance events around the world. This year BuskerFest is welcoming performers from such countries as Australia, Ireland, Japan, U.K. Russia, U.S., Italy, and Israel. Many of them have garnered awards from festivals and set records for their skills. At least one might be set this year.

“We have had many world record holders [perform],” says Mackenzie Muldoon, director of communications at Epilepsy Toronto. “But this is only the third time a record has been attempted to be set at the festival.”

This year, Michael Francis Magic will step up to the plate. His goal: the most Yo-Yos spun simultaneously. If you can manage more than two, that’s pretty impressive. Michael will attempt to one-up the previous record of 16, set back in 2010 in the U.K.
The record Epilepsy Toronto most wants to see broken this year is the funds they raise to provide counselling, information, and support to 40,000 people with epilepsy.

Donations collected at the gates by purple-shirted volunteers are the main source of revenue for the charity. Inside, money tossed into the hat goes directly to the performers, because that’s how they make their living, Bobb points out. “And it’s a great system, if you think about it,” he said.  “Like the show? Throw something in the hat; don’t? Walk away! Wouldn’t it be great if all forms of entertainment worked that way?”