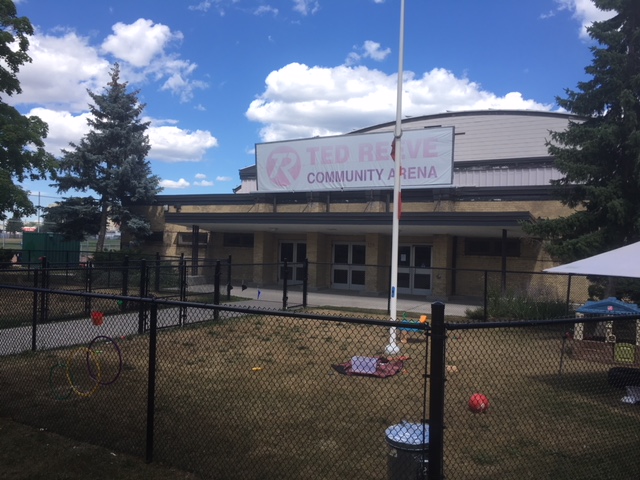 Ted Reeve Community Arena at the corner of Main Street and Gerrard Avenue.

The Ted Reeve Community Arena has anchored the north east corner of Main and Gerrard coming on 65 years.

Under its distinctive roof, our cozy community rink has hosted many seasons of hockey, countless lacrosse games, figure skating, pleasure skating, roller derby, wrestling, concerts and a wide array of events. On opening night on October 13, 1954 over 3000 packed the place—celebrating the culmination of many years of planning and an amazing community fundraising effort that was instrumental to the building of the arena.

“When the rink finally opened in 1954, it became a symbol for neighbourhood involvement, progress and a certain self-reliance that the east end is known for. It became a symbol for Ted Reeve and his unwavering commitment to our children,” it says on the Ted Reeve Hockey website.
In 2004, as a result of increased local demand for indoor ice time and floor time, arrangements were made with a third party to cover an existing outdoor ice surface next to the arena and equip it with the necessary components to serve as an additional indoor facility in the community.

The recent announcement that the Board of Management of Ted Reeve Community Arena (TRCA) has received City approval to assume the management of this covered outdoor ice rink (locally known as the Bubble) is good news. And it is a turning point – consolidating the operation of the two arena facilities under the auspices of the community and providing a timely opportunity to explore future possibilities for the aging facilities as well as considering overall site enhancements that could provide major benefit to the community for generations to come.

It is my honour to be part of an advisory group tasked with looking ahead and facilitating a visioning process with stakeholders and the community at large.

To paraphrase TRCA Board Chair Ron Wilford, the Board “wants to plan for the future while honouring the tradition of the facilities, explore the possibilities and serve the community with an exciting vision.” In my view this vision can indeed be exciting—as well as innovative and forward thinking. The arena facilities, along with the East Toronto Athletic Field and the Ed McCleverty Equal Access Playground, are situated on an incredible site in our great city.

Surrounded by active, creative and diverse neighbourhoods and adjacent to two major transit stations, there is amazing potential “to build community” as we explore ways for the facilities, amenities and programs to support the sport, recreation, leisure, culture and social activities desired by the community now and into the future. As stated by Councillor Mary-Margaret McMahon “this is a tremendous opportunity for the community and beyond.” In the coming months, the advisory group will work in cooperation with TRCA Board and the City of Toronto, to lay the groundwork for the visioning process. Dates for community meetings to be held in late September or early October will be announced. In the meantime please email vision@tedreevearena.com if you would like to get involved or would like more information.

Michael McCauley lives in the Beach and has been involved in numerous community projects and organizations. He is coordinating the efforts of the advisory group working with the TRCA Board on the Ted Reeve vision project.