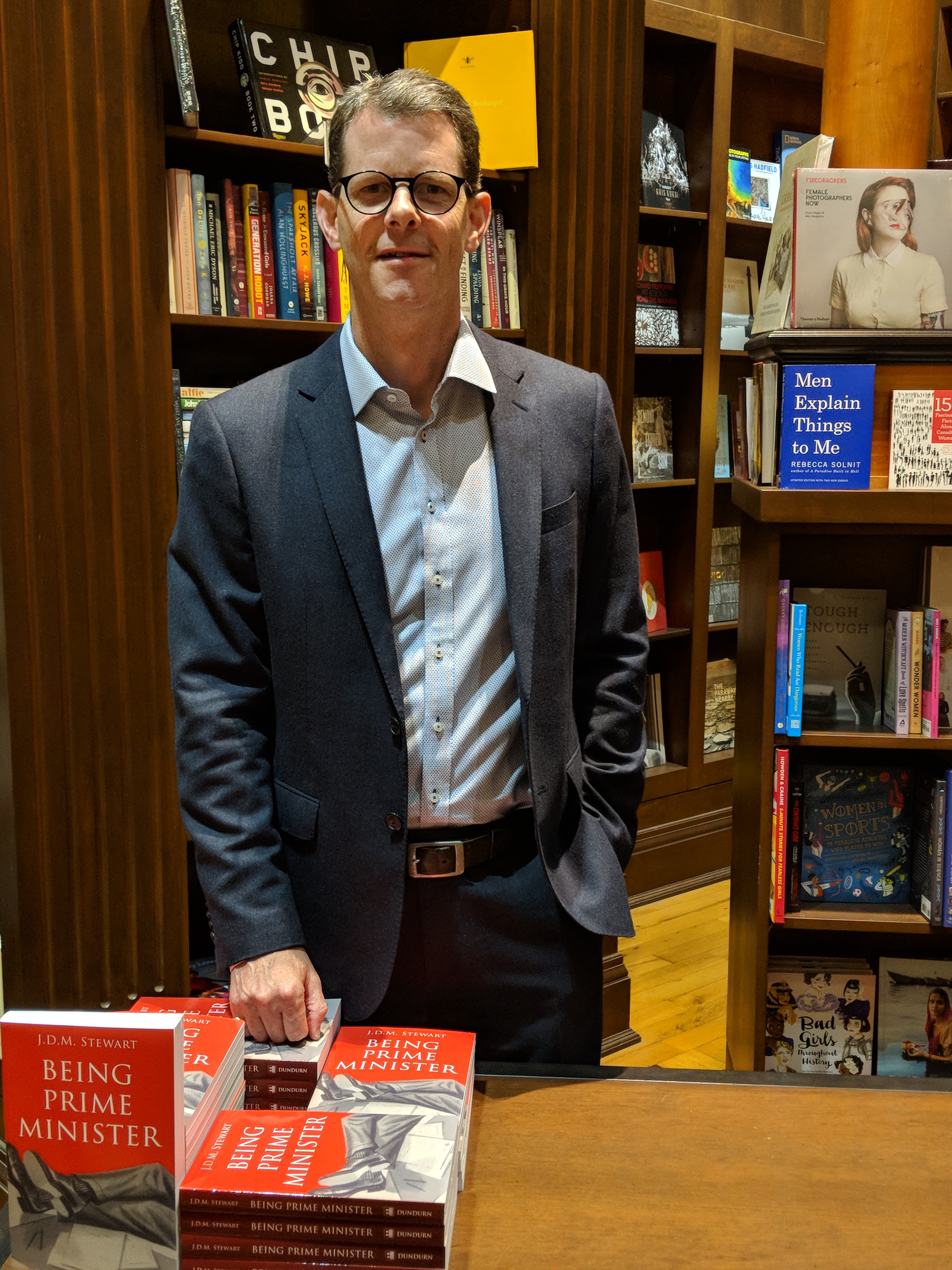 J.DM. Stewart, with his new book Being Prime Minister, at a recent book signing in Toronto. PHOTO: Contributed

J.D.M. Stewart’s first book, Being Prime Minister, originated from a lifetime of curiosity about the woman and men seated in Canada’s highest office, and the unearthing and weaving together of a treasure-trove of “amazing stories” by the author himself.
Using vacation days away from the Bishop Strachan School where Stewart teaches American and Canadian history, it was while digging through decades of newspaper and magazine material at the National Archive that Stewart found his gold.
The “day-in-the-life” stories were the most fascinating he said, offering not only a “behind-the-scenes” look at life as a PM, but a look at the more human side of the role as well.

“When I was young I thought I wanted to be prime minister one day,” said Stewart in a phone interview from his home in the Beach. “I have been studying them my whole life.” His journey to Ottawa also led him to an archive of letters and notes from people who had brief contact with PMs as well as those who were more closely associated with them. Adding to these historical accounts are Stewart’s own interviews with six of the seven living prime ministers (only Stephen Harper declined), as well as the friends, staff and everyday folk who mingled with them during their time in office.

One such story connection led Stewart to Farley Mowat’s widow, Claire, who described how in the late 1970s, then-Prime Minister Pierre Elliott Trudeau acquired not one dog from them, but eventually, two. “The first dog was highly regarded by Trudeau for his intelligence, so much so, he decided to get a second dog from the Mowats,” he said. Unfortunately, dog number two wasn’t as smart or as well behaved as the first, and both dogs eventually ended up living with Margaret Trudeau’s parents in B.C., he laughed.

“There are so many stories in the book,” said Stewart, know locally as James. “For example, I was not intending to write about celebrities, but found so many interesting archives about Charles Lindbergh and Shirley Temple visiting with Mackenzie King that the chapter just developed.”The insightful, and often humorous stories, come directly from the staff who worked with the PMs
directly.

One story, told by John Diefenbaker’s aide, Mike Deacey, recalls the PM’s 1958 visit to Northern Ireland when he was served an “Irish coffee” upon his morning arrival. “He was faking the drinking of his Irish coffee,” said Stewart, since unbeknownst to the Women’s Air Force who set up the food service, Diefenbaker was a
teetotaller.

Stewart said the resilient PM raised the glass to his lips several times and that “he managed to use conversation to distract from the drinking of the coffee before someone could whisk it away.”

Covering every aspect of life as a prime minister, beyond the celebrities they met and the pets they owned, Being Prime Minister has a mass appeal that provides fun facts and a memorable anecdotal history lesson that’s indeed a treasure.