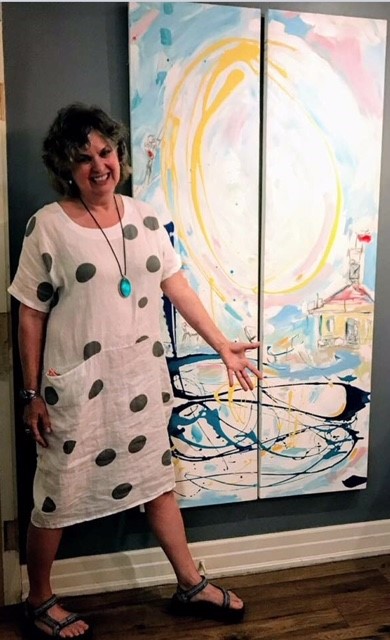 For Beach abstract artist Pam Mayhew, her series Abstracting the Leuty is all about the narrative.

“It’s really trying to tell a story,” she said from The Porch Light Restaurant where she has an exhibit. “Like what is that guy doing climbing on the sun beam? Or why is that guy climbing the Leuty? It’s about that story, and that mystery, that something is about to happen.”

Growing up in Ottawa surrounded by a family of artists and art collectors, Mayhew’s aunt lived next door to Group of Seven artist Lawren Harris. She has fond memories of watching Harris as he painted and responded to her many questions and comments. “He sat me on a stool. I had no idea who is was,” she laughs. After studying painting and art history at the University of Ottawa, and receiving her master’s in art education at the University of Victoria, Mayhew studied interior design at the International Academy of Design in Toronto and at Sotheby’s in London.
“I can’t believe how much my design background has influenced my art,” she said. It’s been helpful for her clients when they’re choosing one of her pieces, too.

People will often say, “I’ve got this place, I need something here” and all too often they are scared to go too big, she said. “So I come in with a painting and say ‘how about a painting similar to this? But bring in the orange of your sofa and this tone of green’ and I just do it. I am not against that at all. And I definitely approach interior design from the art angle.”

After studying under one of Canada’s most important painters, Order of Canada recipient Kenneth Lochhead, Mayhew said she didn’t make a living from painting but worked for a firm that specialized in art as an art consultant. “Then I went back to school and I studied interior design and I did that as a business for a long time,” she said. Mayhew has plenty of terrific tips and advice for her clients and for her students at Humber College where she works full-time as an interior design professor.

Now that her love of painting has become more of a focus in her free time, she’s been busy creating art for local art shows such as The Beach Studio Tour, where she found people were really interested in what she was doing. “It’s fun,” she said.
Her use of bright colours and whimsical style have also made her a popular artist to follow on Instagram and Facebook.

“I like it to be bright, I don’t like it to be dark. I think about people’s walls at home as well,” she said. “I started making sure that I had more blue because some people have all-white walls. We have a lot of blues down on the beach, with the changing colours of the sky and the water. I keep the strong colours on the backburner, and the blues are predominate, as is the colour polymer I use, which is a strong colour. My design background influences my palette.”

For Beachers looking for tips on selecting art pieces, Mayhew advises against putting small little things in teeny Beach homes. “It will chop up the space. Go big, and that will make such a difference,” she said. She’s also all for adding a modern touch to an old home, such as an abstract piece of art. “Going for stodgy things in our old homes just keeps our homes stodgy,” she said. “The thing about abstract is every time you look at it, you’ll get to see something different. I find you don’t get tired of it as much when it’s an abstract ––especially because we’re living in older homes in the Beach, it’s nice to have a modern approach which really updates our homes.”

In her bold abstractions of the 98-year-old Leuty, Mayhew uses names such as Capturing the Leuty, A Leuty Moment, or the Shores of the Leuty as the starting point of her narrative, and each one features bright colours and gestural expressions that are fun and joyful.

She’s willing to paint custom work for clients too, and is currently working on a painting for a family featuring kids and dogs. “It’s not going to be a literal interpretation, but there’s the dog and the kid in some form. The idea when you have a dog or a person, is it gives a sense of depth and you can put them in the foreground. It’s an interesting way of playing with space as well.”

As for the Leuty and capturing its graces, Mayhew says “it’s about the bicycles going by and the swirls you see in the water, and the depth and the stories that are in the water, she said. “I wanted it to be bigger than just ‘the Leuty’, I want it to be about the sun, the warmth, the community,” she said. “Living here, we’re always longing for the summer, so why not be reminded of it daily.”
Pam Mayhew’s show, Abstracting the Leuty, is featured at The Porch Light Restaurant at 982 Kingston Road until July 14.