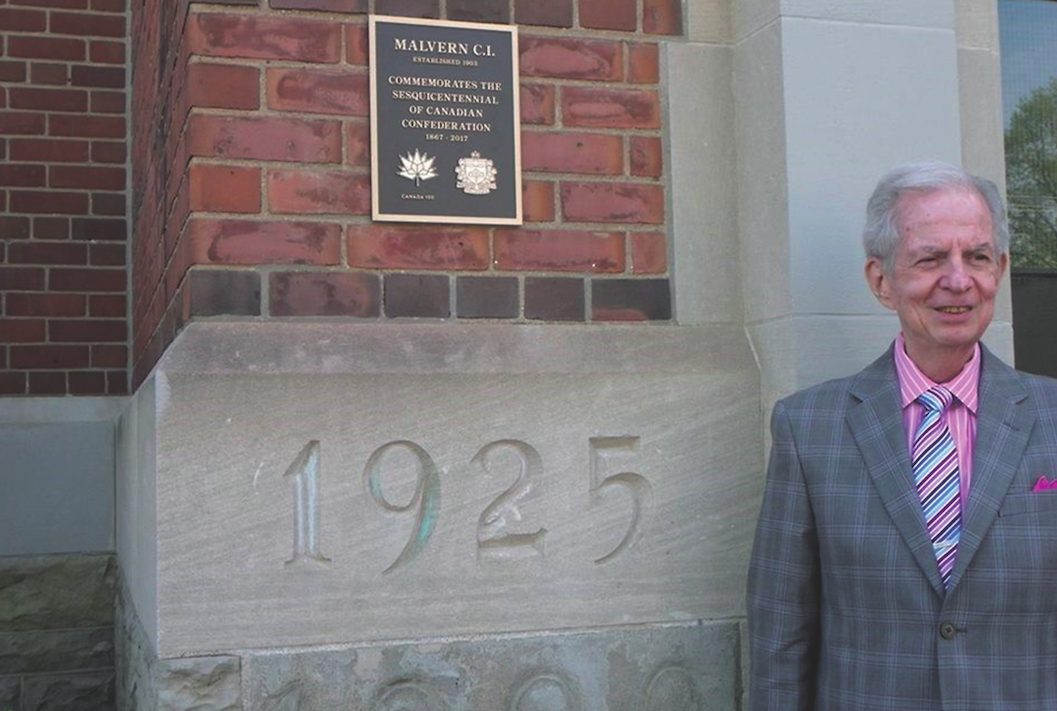 Evan J. Butchers, who attended Malvern in the late 50s and early 60s, was elected as the new president of the Malvern Red and Black Society, and Sandra Burk from the Class of 1975 was voted in as its new vice president—both have had a long association with the Beach community.

We wanted to welcome our new president and asked him to introduce himself to the Beach Metro News readership. In the photo, he is seen standing beside the new sesquicentennial plaque funded by alumni donations. The plaque is a lasting reminder for future Malvern students that we had marked a significant occasion in the history of Canada. The new maple and other trees, gardens, and plantings around the school are also a tribute to the 150th anniversary of our country.

As an Ontario licensed funeral director for 49 years and a loyal Malvernite, Butchers has served his community in various capacities. He gave support through past memberships as a Rotarian with the Rotary Club of Mississauga and as a director with the Lions Club of Frankford, Ontario where he owned and operated his own funeral home for a number of years. During that time he was chosen “Lion of the Year” in 1996 and also served as president of the Frankford Business Association and as a director with the Trenton Memorial Hospital Foundation.

A long-time member of Calvary Baptist Church on Main Street in the Beach, he also serves as a church trustee.

A volunteer Santa Claus for 58 years to many Malvernites’ children and grandchildren celebrating Christmastime, he is also a member of the Balmy Beach Club. In fact he travelled to various parts of Europe on four different occasions with the Balmy Beach Old Boys Hockey Team along with a number of other Malvernites.

“Under my leadership, I aim to broaden our membership by reaching out to a number of Malvernites that I know personally,” he said. “As a result, those people that I have reached will in turn help in broadening our base. Through the process of continuous recruiting from their ranks, we will also gain more financial support enabling us to carry on with our work.”

You can reach the Malvern Red and Black Society online at www.malverncollegiate.com. We need to continue to reach out to students and staff from decades past, particularly those from the ’70s, ’80s, ’90s and 2000s so they can carry the torch for Malvern C. I. and for Malvernites, past, present and future.