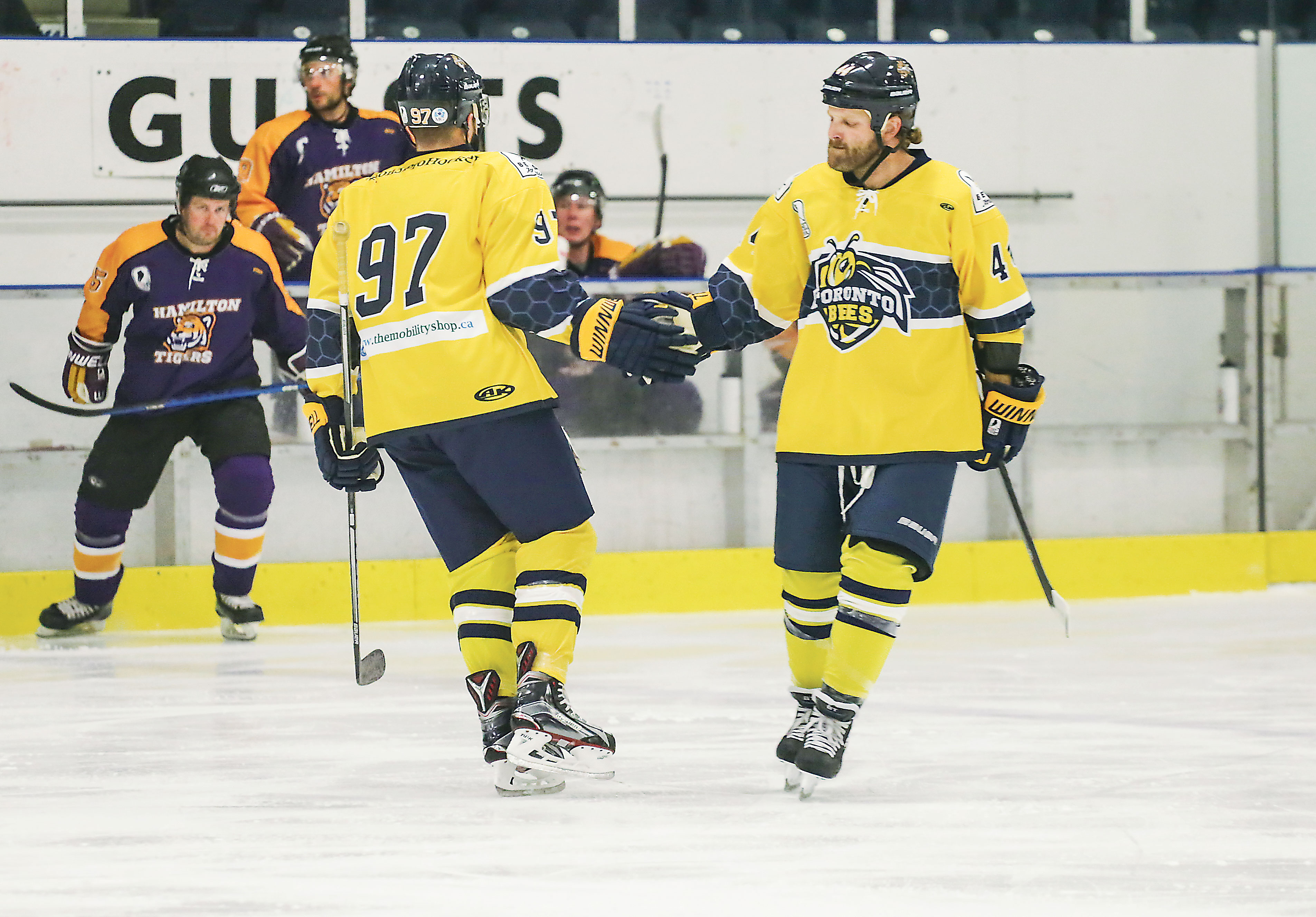 Toronto Bees captain Brandon Turner (right), who grew up playing at Ted Reeve, on the ice versus the Hamilton Tigers during 3HL Tour action. PHOTO: 3HL

The 3HL Tour is the brainchild of Bluffs-born Justin Fox, who found inspiration in the three-on-three overtime play that has been a fixture in NHL hockey since the 2015–16 season.

“I just thought, wow, this would be amazing if there was a league that was exclusively, or only, three-on-three. It would be intense,” said Fox, who incorporated the 3HL in November 2015.

Now wrapping up its third season of play, the tourney-based league is hosting its final event, the Champions Cup, on Saturday, April 14, at Ted Reeve Arena starting at noon. “Anything could happen,” added Fox.

That is in part thanks to tweaked rules. Icing and off-side aren’t called, and an entire game lasts only 14 minutes. The tournament’s format, which draws from NCAA basketball, also adds to the unpredictable nature.

All 12 teams are invited, but only eight can go on to play in the championship tournament for a $15,000 main prize. Like in March Madness, there will be a “play-in” elimination round. Teams ranked fifth and lower will compete in knockout games for the right to join the top four clubs in the 3HL Championship Cup beginning at 3 p.m.

Ahead of the contest, Brandon Turner, captain of the second-seed Toronto Bees, said his team is logging plenty of ice time. “We’re on the ice all the time,” said Turner, who liked what he saw when he found out about the league via social media. “It’s extremely fast,” he said of the gameplay. “You really have the whole ice to work with.”

One of Fox’s goals with the league is to provide opportunities for players like Turner who, though talented, aren’t lacing up the skates for an NHL team.
“The idea of the 3HL is that we become that true pro hockey league… for Canadians to play pro hockey right here in Canada,” said Fox.

The league is currently limited to Ontario but has already attracted former NHL talent, including one-time Edmonton Oiler Jason Williams, who plays for the ninth-place London 3’s.

There are plans to expand to 33 tournaments next year, kind of like pro tennis or golf seasons, except competitions are over in three hours.
Adult tickets are $19.99 and admission for anyone 17 and under is $9.99. Tickets can be purchased at www.3hltour.com/tickets/