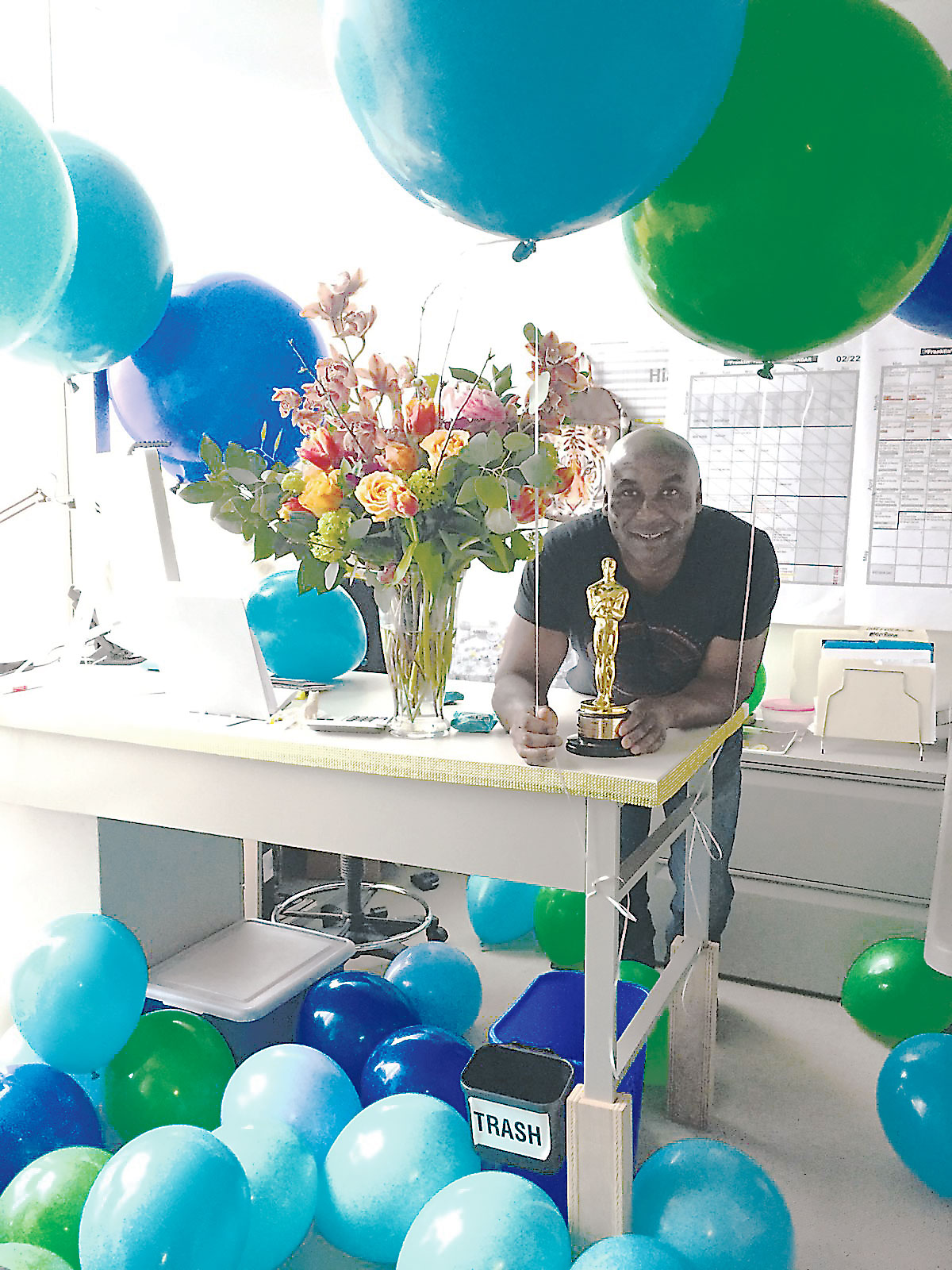 Karl Brown poses with the Oscar he and his set-dressing teammates won. PHOTO: Contributed

KARL BROWN was in a unique position for a Beacher watching the Academy Awards on March 4—one of the Oscars being handed out that evening could be his.

Brown is a set dresser who worked on auteur director Guillermo del Torro’s The Shape of Water, nominated for 13 Oscars. “I had so much energy that night,” Brown recalled.

It surprised him when, after the film was announced the winner of Best Production Design—one of four categories it ultimately won—set decorator Jeff Melvin whipped out a piece of paper and read all the names of those he worked with, including Brown’s.

“Even my parents told me. They were shocked when they heard our names read,” said Brown, who had turned 50 the same week.

“For us, it was almost like he brought us there,” he added.

The Oscar is one of the high points of Brown’s 24-year career in film. It is also the culmination of nearly half a year of six-day weeks and 12-to-14-hour shifts spent getting sets just right for an uncompromising del Torro.

“He demands a lot, and he demands perfection,” said Brown, who also worked on the 2016 Oscar-winning film Spotlight, as well as Pacific Rim, Hairspray, Kick-Ass 2, and more.

Brown’s fingerprints are all over the sets seen in The Shape of Water, which is a twist on the traditional mermaid film and features a scaled merman and a play on the classic Cinderella slipper.

The Upper Beach resident helped dress apartments that appear in the film, as well as offices, a parking lot, a pawn shop in Hamilton, and a car dealership. “I basically touched all the sets,” he said.

“We were all contributing,” Brown added in a nod to his teammates.

His team was in charge of various tasks, including wiring, furniture placement, drapery, detailing walls—and some heavy lifting, too.

A dust-covered Brown was one of those responsible for retrieving out-of-use medical equipment from the old Humber River Hospital, which was recently demolished to make way for a subdivision.

“We were tearing up stuff as the wrecking ball was hitting the side of the building… and we’re pulling out gadgets,” he said.

He was also sent with a partner across the border to pick up a commercial fridge. “It was heavy as hell—I’m talking probably 2,000 pounds, and it was sitting in an old garage in Buffalo,” he recalled.

“Somehow the two of us managed,” he said, adding, “Our bosses insisted this is exactly the piece that we need.”