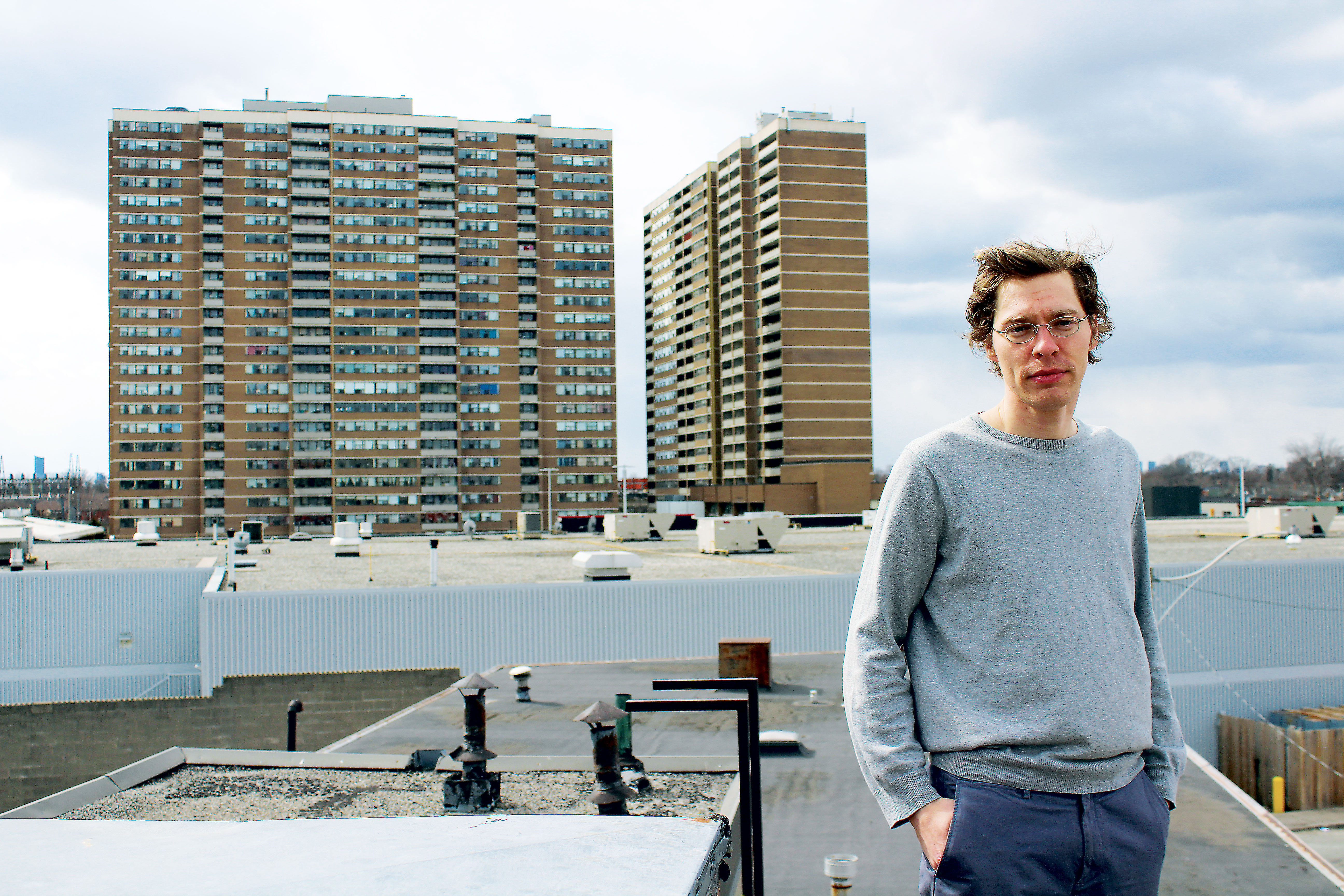 IT’S NOT an obvious source of artistic inspiration. Main Square, a concrete slab-style apartment complex on the southeast corner of Main and Danforth, isn’t something people would generally find all that beautiful, says local artist Stefan Berg.

That’s kind of the point.

For the past nine years, the four towers of Main Square have been a regular subject in his paintings—and he says people have responded precisely because it’s an unexpected choice.

“I’ve heard this from a number of people who have seen the work, that they kind of think that it’s amazing that I’ve taken something so mundane and made it kind of beautiful,” said Berg, whose work you may have seen hanging in the Upper Beach coffee shop Grinder on Main.

The towers have loomed large in his work not least of all out of convenience. The ’70-era buildings are immediately visible from his converted studio on Dawes Road. He’s come to appreciate visual elements the towers provide, the tension of the negative space between them and the lighting achieved at certain times.

“Over the years I’ve become increasingly more interested in the buildings,” Berg said.

Sometimes, Berg paints from his rooftop, other times he’s within his studio. Always, he does it with oil paint on either wood or canvas.

The works range in size from three-by-six feet down to eight-by-10 inches. Berg chipped away at the largest over a three-year period, while a smaller work was done in a single sitting.

Each painting was done from life—rather than a photo—which presents challenges. The buildings are standing still, but a cloud could block out the sun one moment, completely changing the lighting.

Berg’s work stands as a testament to some other changes. Last summer, a structure on the site was demolished, and one of the paintings captures this.

More drastic change may be on the way. Two more towers have already been approved for the site, meaning the skyline may soon be altered.
Berg’s response is doubled-edged.

“The nature of the city evolving is inevitable and coming to embrace that is sort of necessary,” he said.

“If something ends up popping up in the distance that can be incorporated in some way [in my art], then I’m open to that,” he added.

But there are also darker shades to the development for Berg. It gives off a “looming sense of the future,” he said, a future where there might not be room for artists.

“I’m not looking forward to a lot of the larger condos being built in the neighbourhood just because of virtue of the fact that they will push out the people like me eventually.”

To see more of Berg’s work, visit stefanberg.ca or send him an email.