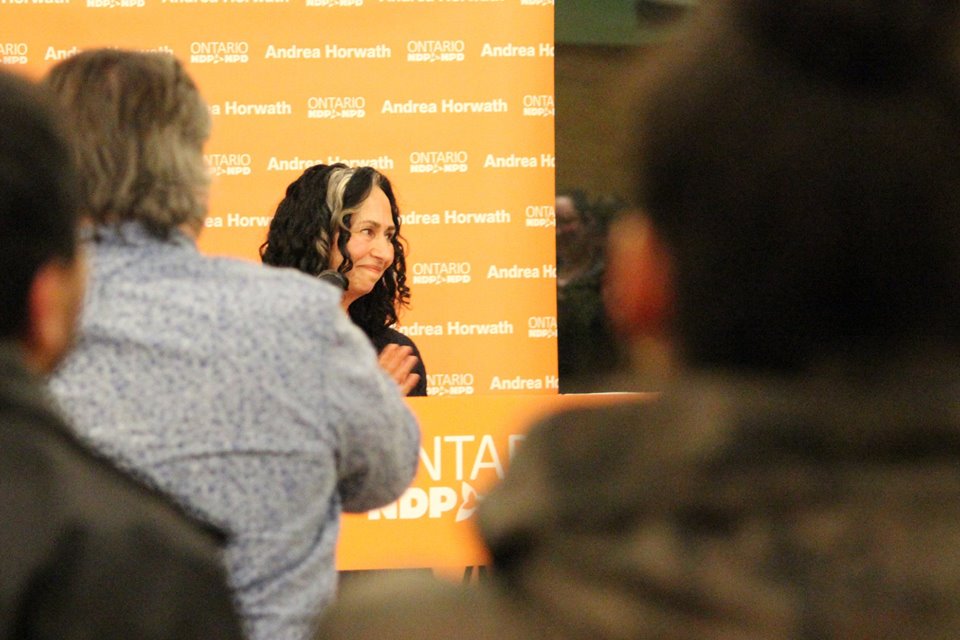 Rima Berns-McGown accepts the nomination to be the NDP candidate for Beaches-East York in the upcoming June election on Feb. 22, 2018 at Beach United Church. PHOTO: Jeremy Johnston-Kaye

Change was in the air at last night’s Beaches-East York NDP nomination meeting, where local anti-racism activist and educator Rima Berns-McGown was tapped as the riding association’s pick to run in the upcoming provincial election against Liberal incumbent Arthur Potts.

“We’re going to take this riding back, and then we’re going to make all of the changes that we said we were going to do,” said Berns-McGown, speaking to a full house at Beach United Church, Feb. 22 in her acceptance speech. Berns-McGown defeated community organizer, activist and artist Olivia Coombe to win the nomination.

A 25-year resident of Beaches-East York, Berns-McGown was born in South Africa and has a masters in international politics and economics. Her work and research has centred around anti-racism initiatives and working with marginalized communities, experience that would influence her role as MPP, if elected.

“I love this country with a passion, and what I love the most about it is that it has the enormous capacity to lead,” she said. “Canada can be a truly equitable society that works for everyone within it and Ontario can lead the way. We can truly be what we say we are, but first we have to act.”

Her speech highlighted inequities in housing, healthcare, wages, and the treatment of Indigenous and Black youth.

“The housing crisis … is not a crisis, it’s bad public policy and bad planning,” she said, adding that she wants to push the “public political conversation to take systemic change seriously.”

NDP leader Andrea Horwath opened the meeting, speaking broadly about the NDP’s priorities and highlighting the work of past Beaches-East York NDP politicians like longtime MPP Michael Prue, who lost the seat he’d held since 2001 in the 2014 election to Potts.

“We’re about 100 days away and we are in it to win it,” she said. “The candidate you nominate tonight is going to be part of an NDP government.”

One of Berns-McGown’s nominees was Hamilton city councillor Matthew Green, who said he was in the riding as a “new New Democrat” because he has “seen the dire effects of decades of ‘faux-gressive’ Liberal policies.”

“This is not just about Beaches-East York, this is about the province of Ontario,” he said. “As an educator, I know that [Berns-McGown] is going to take back the language of social justice from the neo-Liberal centre, and as a mentor she will inspire a new generation of leaders in the riding.”