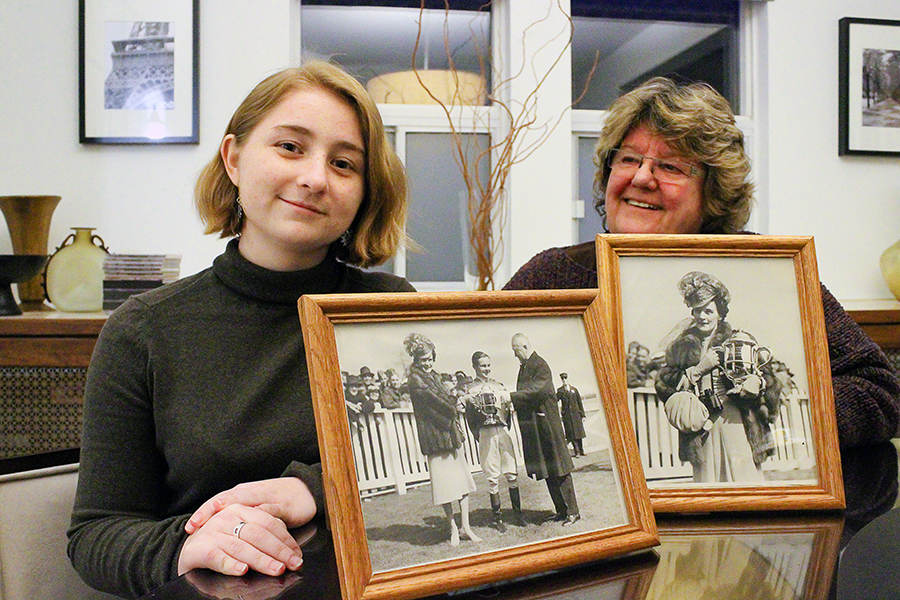 Sharing centre stage with my young neighbour, India Harvey-Kane, during a talk on my latest book, Rivers of Gold, was a reminder of the unforeseen bonuses of my chosen profession. Weaving the colourful history of horse racing with the science of genetics, Rivers of Gold is populated with magnificent horses and their often extraordinary human companions.

Among the cast are India’s great-great-great grandmother, Mildred Kane, and her horse, Willie the Kid, winner of the 1940 running of the King’s Plate at our local Woodbine Racetrack. The victory also established Mildred as the first woman to own the winner of the country’s most prestigious horse race.

And so it was that India, with the assistance of her mother, Tina, brought Willie the Kid’s King’s Plate trophy, oil paintings, horseshoes, and other memorabilia to the standing-room only evening at the Beaches library on Queen Street East.

While I fielded questions regarding the equine stars of Rivers of Gold, India graciously spoke of Mildred and took the audience on a tour of the horseracing treasures. In the process, history came to life. We all benefited.

It was a lesson in life’s unexpected gifts and full-circle moments.

My career as an author got off to a rocky start. After my first book, E.P.Taylor: A Horseman and his Horses, I vowed to never write another. Of course, had I not been a complete rookie I would never have contemplated writing about Canada’s most powerful entrepreneur. It took over 10 months to secure my first interview. Years to earn his trust. And then there was the research and writing. And rewriting. And more rewriting.

Fourteen years later I was lured back into the world of long-distance writing by a feisty little Canadian champion named Northern Dancer, a horse that called Woodbine Racetrack home.

No doubt guided by the hand of fate, my change of heart, appropriately, took place in a bookshop.

As I was entering, I passed a fellow leaving the store. When I reached the front desk, the proprietress explained that the gentleman was from the US and was looking for a book about Northern Dancer. She asked if there was one. There wasn’t.

“OK,” I said. It was the easiest decision I have made.

My previous publisher had been bought by another and they weren’t interested. “Who wants to read a book about a horse?” they brayed, as did every other Canadian publisher. But while writing about E.P. Taylor was challenging, I learned a lot, not the least of which is, never quit. So we started our own publishing company, Beach House Books. An international bestseller, Northern Dancer: The Legend and his Legacy has been translated into Japanese and Spanish and read by millions.

For further info on Muriel Lennox and all her books go to www.beachhousebooks.ca