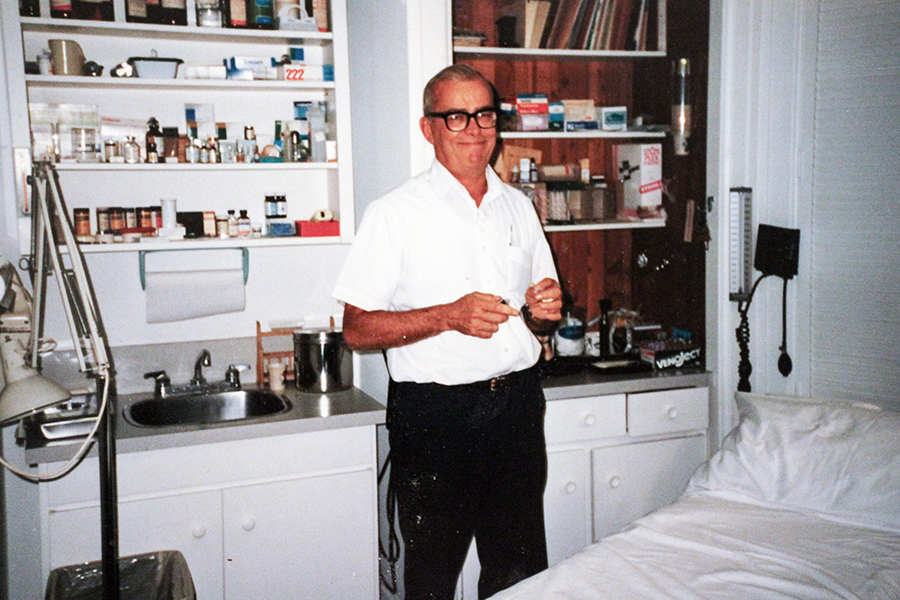 Dr. “Skip” Wentworth Jones served the Beach as a family doctor for over 50 years. PHOTO: Courtesy of the Jones Family

Shirley Jones keeps returning to this phrase as she and two of her daughters, Laurie and Heather, share memories of her late husband Dr. “Skip” Wentworth Jones, who died Feb. 13. He was 86.

Seated in the living room that was at one time the doctor’s examination room in the Beach home Wentworth and Shirley purchased in the ‘50s, the family spoke of his unflinching dedication to patients, which came to be one of his defining qualities, his passion for sailing—including building his own boat—and smaller details, like a penchant for bowties and Birkenstocks.

Shirley first met Wentworth, born in a Montreal suburb during the depression, at a church event in the Beach when Shirley was 16. The teenagers went tobogganing together that evening. “He had his arms around me in the back,” Shirley recalled. “And he thought, as he held me, ‘This is somebody I want to know better,’” she laughed. They were a couple ever since and married in 1955, one year before Wentworth graduated from medical school at the University of Toronto.

When asked, Shirley can’t pin down a fondest memory from their life together. There are too many.

Their home of more than half a century was a full one. The two had six children together—Laurie and Heather’s siblings are Sara, Susan Underwood, Lily Bergasse, and Tom—leading to hectic mornings in a single-bathroom home. But Wentworth’s patience, another trait his family remembers warmly, always prevailed. Heather said her dad taught her “to be patient,” adding, “Daddy was always so patient with all of us.”

Wentworth retired in January 2014 after more than 50 years serving the Beach as a family doctor. He suffered from Alzheimer’s disease at the end of his life.

A lifelong member of the Balmy Beach Club, Wentworth was an accomplished paddler, even winning a canoe championship in 1950. He shared his waterfaring ways with his wife, and the two took canoe trips over the years, although Wentworth was wont to leave his patients back in the Beach for any period of time.

“The phone was ringing all hours of the night when women were having babies,” said Heather.

As talk turns to canoe trips in the Jones household on the afternoon before the memorial service, Shirley suddenly has her fondest memory: their honeymoon in Honey Harbour.

After getting married across the street from their home, their friends drove them out of the city. A fellow Balmy Beach Club member had loaned them a canoe, but when they reached the water they were in for a surprise. “It just began to fill up with water, it was really hilarious,” said Shirley. Undeterred, they managed to enjoy their two-week retreat in Georgian Bay.

“I’d never done anything like that before,” Shirley said. “He was in charge, and he taught me to paddle.”

Our Deepest Condolences To You All. Dr. Jones Was A Fine Man.. Great Family Doctor For Our Family. May He Rest Peacefully In The House Of The Lord. God Bless You. Thanks Dr. Jones.

Thanks for your dedication and passion throughout the years. Condolences and prayers. R.I.P. Dr. Jones.