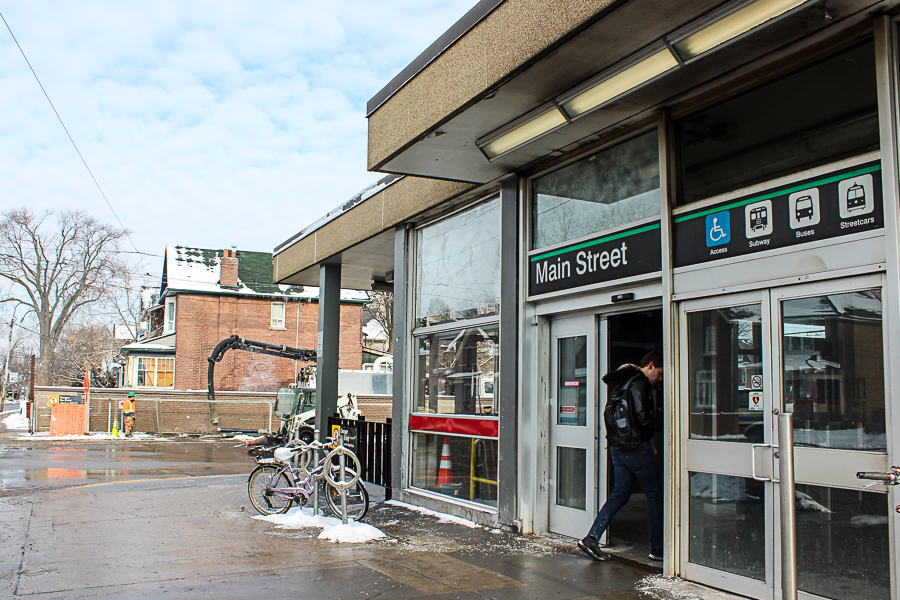 The area around the TTC's Main Street Station is going to be under construction beginning in May. PHOTO: Anna Killen

Details about upcoming changes to the area around Main Street Station will be revealed at a community open house tomorrow evening at Hope United Church.

The work, scheduled to begin in early May and be completed by the fall of 2018, includes track replacement, lighting work, and initiatives to improve pedestrian safety, according to the TTC.

While the station will remain open at all times, buses will be diverted during construction and bus stops will be temporarily relocated to Danforth. Lanes will be reduced on Main Street, and the intersection of Main and Danforth will be impacted for one weekend, said TTC community liaison representative Lito Romano.

When the work concludes, commuters and residents can expect to see a brighter, safer station. The city is proposing that taxi stalls be relocated from Main Street to Barrington Avenue (the street just east of Main) “in order to improve safety in front of the station.”

And the walkway connecting Main Street and Barrington Avenue, at the north end of the station, will be moved to the south end of the station. “The new walkway will be much wider, accessible and convenient for our customers,” said Romano. “We are also working with the City on other initiatives to improve pedestrian safety. These will be presented at the open house.”

TTC is co-hosting the Jan. 17 meeting with Hydro One, which has concurrent scheduled work along and north of Main Street throughout 2018.

Projects are being coordinated in order to “minimize disruption,” said Romano. “Our work will involve reducing lanes on Main Street as well as temporarily impacting the intersection of Main and Danforth (one weekend).”

Hydro One’s work involves replacing underground transmission cables between the Lumsden Junction, near Eastdale and Lumsden Avenues, and the Main Transformer Station, near Main Street and Stephenson Avenue, according to a notice about the meeting. This is part of a larger infrastructure refurbishment project throughout East Toronto.

Most of the TTC’s work “involves track replacement and resurfacing of the bus roadway which are due for renewal,” said Romano, adding that part of the track work is needed to accommodate the new low-floor streetcars.

Staff will be on hand with displays and to answer questions between 6 and 8 p.m. at Hope United Church, 2550 Danforth Ave., Wednesday, Jan. 17.