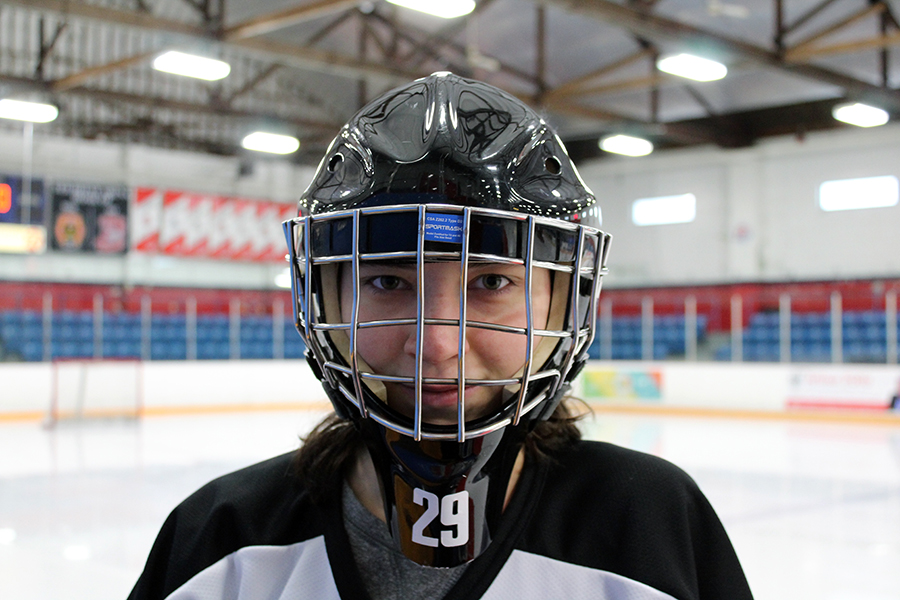 Her willingness to take on the enforcer role wasn’t completely selfless.

She didn’t want to be on the ice unless she could play her ideal position: goaltender, a role the Grade 12 student now relishes with Malvern Collegiate Institute’s varsity team.

“As soon as I started playing, I knew I wanted to be a goalie, but my mom really didn’t want me to be a goalie,” Balazsi said, noting her mother, Belinda, had been a goalie in her youth and was concerned about the added pressure of the position. That, and the risks of the role as well as the added cost of the equipment made it a tough sell.

But Balazsi was determined, something she attributes to her favourite player, current Vegas Golden Knights goaltender Marc-Andre Fleury—or, more specifically, the bright yellow pads he donned as he led the Pittsburgh Penguins to three Stanley Cup titles. “When I was five, I was like, ‘Oh, those are really pretty. I want to be a goalie so I can have pretty pads,” she said.

It took a year for her to win her mom over, and the struggle didn’t end there. Her first game between the pipes at age six was a wash.

“It was pretty bad,” she said. Her team lacked a backup goalie in the lineup that day, so she had to stay in the crease for at least eight goals. Her team was not impressed.

“They were like, ‘Oh, we’re stuck with her,’” she said. She didn’t play in the net again that year.

Balazsi hasn’t had that problem at Malvern.

After being asked to try out this past fall for what was then the varsity boys team—it has been renamed a varsity team because she made the lineup—Balazsi has posted a stellar record of five wins, one loss and one tie with a goals against average of 1.5.

“A female player on the team is something new for us, but the transition has been seamless,” her coach, Doug Underwood, said in an email. “Her teammates are appreciative of her contribution to the program in terms of her attitude and quality of play. She has impressed us with her rebound control, positioning, and on ice communication.”

The peak of Balazsi’s nascent career occurred when she was 13. It was the first of two consecutive years she went to Europe for an invitational tournament and placed third. “The first year we went over we were under 13 and playing against under-16 teams, so winning bronze that year was probably the highlight of my career,” she said.

Balazsi’s goal is to make the pros, and she has accepted an offer to play for Brock University’s women’s team next year.

“I would love to play in the CWHL, which is like the women’s NHL,” she said. The future political science student also has ambitions to become a constitutional lawyer someday, but she wouldn’t mind following in the footsteps of Manon Rheaume, who appeared in two exhibition games for the Tampa Bay Lightning in the early ‘90s and was the first and only woman to play in the NHL. “That would be cool.”

To other girls looking to compete against the opposite sex, she suggests focusing on your own abilities. “I would say, ‘You’re just as good. It doesn’t matter what your gender is as long as you know you’re good enough to play.’”

Sharing the rink with boys for much of her life has come with unique challenges—it was tough to adjust to having her own dressing room for the first time when she was 12—but she said “everyone’s been really accepting so far.” Well, almost everyone.

“There’s one team this year that’s like, ‘Oh, good, they have a girl. I can’t wait to play them (Malvern),” she said. The team, which Balazsi did not name, and Malvern have yet to face off this season, but Balazsi is unfazed by the trash talk.

“Just watch me,” she responded.

Incidental-Tom Risko was Malvern’s goalie around 1968-1970