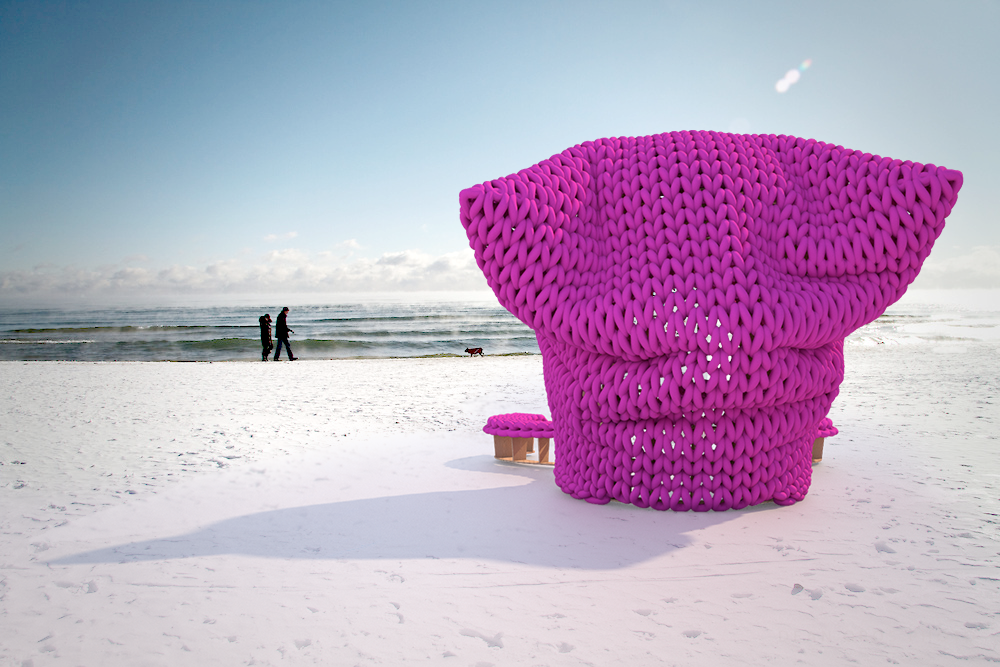 A knitted pink Pussy Hut is coming to the Beach this winter.

The structure—a reference to the Pussyhat Project, which brought knit pink hats to the 2017 Women’s March—is one of the winning submissions for this year’s Winter Stations, an annual design competition and exhibit featuring interactive public-art installations at Kew, Scarborough and Balmy Beaches.

If the Pussy Hut submission sounds more politically charged than what has appeared by Lake Ontario’s shore in previous years, it’s a result of the 2018 theme: Riot.

“We were looking at something a little more provocative given the state of the affairs in the world,” said Aaron Hendershott, an architect at RAW Design and co-founder of Winter Stations, now in its fourth year.

Over 300 proposals from around the world were submitted addressing activist themes ranging from gender equality to environmentalism. Four open competition winners and three student winners were selected by a jury including Ward 32 Coun. Mary-Margaret McMahon.

The installations will be built around lifeguard chairs, where they will remain from Feb. 19 to April 1. Here’s a look at the winners of the open competition.

Pussy Hut by Martin Miller and Mo Zheng, US

Like the pussy hats people sported during the Women’s Day March last year, the Pussy Hut’s exterior is going to be knit. Inside, visitors will find shelves made to hold symbols of strength and inspiration. The hut’s plywood frame is expected to be a canvas for messages of women’s rights.

A pop-up obstacle course of sorts, Obstacle features rotating interconnected columns that visitors need to navigate in order to get to the lifeguard stand (and the views it affords) at the core. Teamwork required.

Make Some Noise!!! by Alexandra Grieß and Jorel Heid, Germany

The name of this installation, inspired by Luigi Rusollo’s experimental instrument the intonarumori, is also a call to action for anyone who checks it out. By turning a crank, participants can literally make some noise via a tweaked manual siren.

Hundreds of toy pinwheels—these symbolize renewable energy—form the outline of a nuclear cooling tower, one that can be entered.

Student-category submissions from OCAD University, Ryerson University and the University of Guelph round out the Winter Stations winners this year.