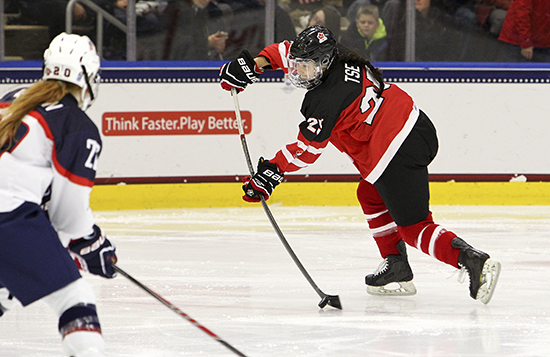 Canada’s Kaitlin Tse makes a pass during preliminary round action against the US at the 2015 IIHF Ice Hockey U18 Women’s World Championship in Buffalo, New York on Jan. 5, 2015. Photo: Francois Laplante/HHOF-IIHG Images

A Beach hockey player is in Germany this week representing Canada at the 2018 Nations Cup.

Defenseman Kaitlin Tse was named to Hockey Canada’s National Women’s Development Team for competition at the four-day international tournament in Füssen, Germany, from Jan. 3 to 6. Canada is competing against teams from Finland, Switzerland, Russia, Germany and Sweden.

The 21-member Team Canada roster was selected from a larger group of elite athletes Hockey Canada has been developing and keeping its eye on.

“These players are part of the up-and-coming Canadian talent that we are tracking as we look towards next year’s IIHF Women’s World Championship and beyond to the 2022 Games,” said Gina Kingsbury, director of national women’s team programs, in a Dec. 15 release announcing the roster. “To be able to provide opportunities for them to play high-level, international events like the Nations Cup is invaluable for them as players, and for us as a management group as we continue to build our pipeline to Canada’s National Women’s Team.”

Tse, who plays for Harvard University’s women’s team during the regular season, has played in international tournaments before.

In 2015, she earned a silver medal at the 2015 IIHF U18 World Championships, telling Beach Metro at the time, “It was a huge honour to represent Canada… It’s something really special to represent something much bigger than yourself.”

Tse, who is also an accomplished violinist, is in her third year at Harvard in Boston, studying architecture and art history. Nearing the halfway mark in her third NCAA season, she has earned 8 points with one goal and seven assists.

Canada plays its first game, against Finland, tomorrow at 9 a.m. EST. The schedule has Canada facing off against Russia on Thursday, Jan. 4 at 9 a.m. EST. Team Canada won a pre-tournament game against Austria 9-0 on Dec. 30 where Tse earned an assist.