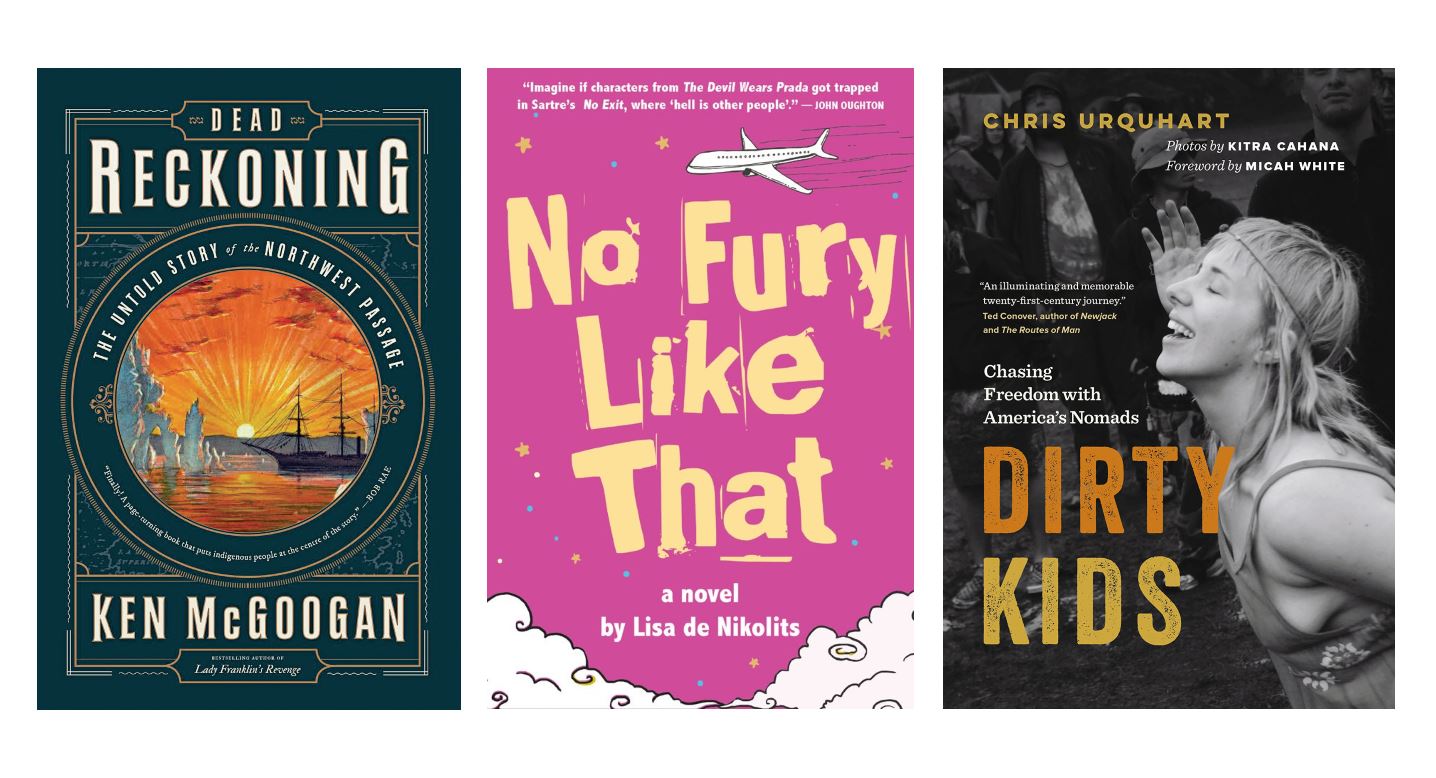 Ken McGoogan's 'Dead Reckoning', Lisa de Nikolits' 'No Fury Like That', and Chris Urquhart's 'Dirty Kids' are books with a local connection.

Over the past few months, the Beach Metro News office has seen the delivery of a number of books penned by local authors. Supporting local authors and bookshops (we are lucky to have a handful of quality bookstores in our area) is a great way to keep it local for the holidays. Here’s a look at a few books with a Beach connection.

In the second half of Dirty Kids, the narrator—who happens to be the book’s author, Chris Urquhart—gets critiqued by a source. Kozmo, one among the scores of nomadic young people Urquhart chronicles in this debut non-fiction effort, asks, “Why are you doing this book?” Before Urquhart answers, Kozmo adds, “It has already been done.”

Fair enough. In laying bare about three years (2009-2012) in the lives of American vagabonds, Urquhart, a former Beach resident, is not charting unexplored territory. The book lends considerable narrative time to Burning Man, an annual festival in Nevada that attracts tens of thousands to the desert annually. It is part of mainstream culture.

But like with many other literary works, Dirty Kids’ strength comes not from the story but the telling of it. Lonesome traveller and On The Road author Jack Kerouac—who gets a nod in Dirty Kids—stood out not because he was the first to write about transients but because he did it in rambling, jazz-tinged prose. Similarly, Urquhart’s voice is one of Dirty Kids’ best qualities.

What starts out as a straight-laced account (academic references and all), develops into a first-person account of a mental health struggle on the road, jumping from communal punk houses to hippy-era gatherings. At first, the shift from traditional reportage to a meta, writing-a-book-about-writing-a-book narrative comes across as symptomatic of a rookie author figuring out their voice. But it mirrors Urquhart’s trajectory from the sober student intent on journalistic integrity to the alienated, Adderall-popping graduate in search of home, not just a story. It works, and well.

Watch for more from Urquhart—whatever their next book’s topic, even if “it has already been done.”

Dead Reckoning: The Untold Story of the Northwest Passage

This is a book that is, at its core, about disappearance. Not only the disappearance of famed explorer Sir John Franklin and his ships, recently uncovered, but, more importantly, the near disappearance of an entire people from accepted historical narrative. The Inuit and First Peoples were at the heart and centre of the centuries-long push to discover and chart the northwest passage, but for over a century their role has been ignored, downplayed and, in some shameful instances (looking at you, Charles Dickens), recast as villainous.

In this terrific and accessible work of nonfiction, award-winning journalist, researcher and explorer Ken McGoogan methodically and compellingly sets the record straight about the unsung heroes and egos of Victorian England’s obsession with arctic exploration by quoting the voices and records of those cast aside. Aided by maps and historical drawings and portraits—and the real world experience of McGoogan, who spends his summers as a guide along the Northwest Passage, Dead Reckoning is an excellent step towards understanding the myths and realities of Arctic history, and will act as primer and context for many as Franklin’s ships are recovered in the coming years.

When we first meet the protagonist of local author Lisa de Nikolits’ latest novel, No Fury Like That, she’s groggy, uncomfortable, unkempt—and missing her husband, in the middle of what appears to be a bustling, bizarre airport lounge. But things are not as they appear. As the world—Purgatory, as it turns out—reveals itself to Julia, so her character is revealed to the reader, a character which, for all of her sass, stubbornness and selfishness, is actually somewhat lovable. She grows even more so as the page-turner drives along and we are wittingly bounced around the rich, twisted world, both in the afterlife and back on earth, created by de Nikolits. At once philosophical and sartorial (there’s a Satre pun there, but we’re not going to print it), de Nikolits says this book is about revenge, and while that’s certainly on the menu, that’s not all there is to eat.

The Nearly Girl writer wrote this book as a way to channel the anger she felt after she was fired from a job she’d held for six years—budget cuts—and the book is a testament to the idea that great things can grow from the ashes, if they are nurtured just so. In the credits, de Nikolits thanks her writing groups, including the local group Mesdames of Mayhem, for their edits and support while writing this novel, and it’s easy to see the influence of female empowerment and encouragement in this refreshing read.

An advocate for financial literacy, Beacher Sean Cooper recently made headlines for buying a house when he was 27 and paying it off in three years. His book, Burn Your Mortgage, details tips and resources he has acquired on his journey to “financial freedom.”

With down-to-earth anecdotes, simple graphics and charts, and straightforward headings and chapters breaking up the text, Cooper shows that learning about money can be accessible, relatable, and dare we say, inspiring.

Part western, part fantasy, part pure badass heroine, V.S. McGrath’s The Devil’s Revolver doesn’t shy away from tough subjects, and won’t be pinned down genre-wise, much like the leader of the series, Hettie Alabama. Relatable Alabama is in many ways the hero we need today, but she exists in an alternate history where magic rules (though some are trying to snuff it out and force it underground) and the 17-year-old’s life has taken a dark, cursed twist involving murder and a magicked revolver.

The book and fantastical cast of characters will stick with the reader like a rollicking train ride through the desert—magic transport tunnels may or may not make appearances along the route—and leave them fired up for the next chapter in the sharp saga of Hettie Alabama.

No Remedy For Love

Back in the ‘80s, Beach Metro News columnist Lorie Murdoch plucked a delightful anecdote from Liona Boyd, aka the First Lady of the Classical Guitar, for her “Persons of Note” column. When Boyd first moved into her Scarborough west home, she pushed a mysterious button and inadvertently set off the alarm system, drawing a handful of first responders to her in-the-throws-of-unpacking abode.

“There were packing boxes everywhere,” she recalled. “It must have looked as if the burglars were getting a good take.” The image of Boyd unpacking boxes in the Bluffs, for the most part, stands in contrast to her jet-setting and exotic life, recounted in detail in this sequel to her 1999 memoir In My Own Key. This latest endeavour, No Remedy For Love, follows her search for renewed self-identity after divorce, and gives a behind-the-scenes peek at her unique life.

But while her famous friendships (Prince Philip, Pierre Elliott Trudeau, Olivia Newton-John) do fill the room, there are also moments of quiet reflection and longing, as well as the overall feeling of a woman determined to live her best life, wherever that may be.