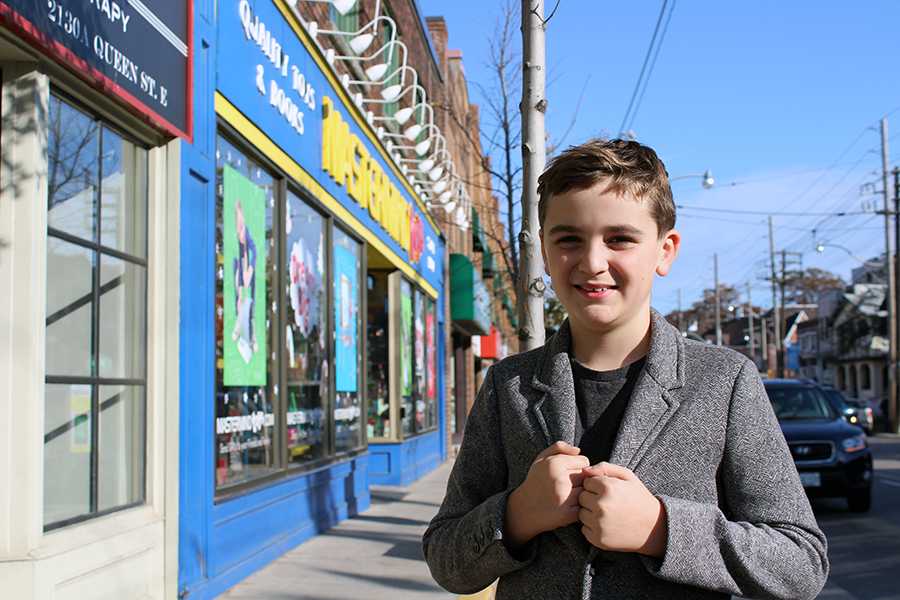 Early on, art instructor Danielle Ward noticed her son Carter’s talents with a paintbrush in hand.

Four years ago, she set out some paints to help Carter, then seven, while away a winter day that he was spending drawing his puppy Merle Haggard. “What he painted on his drawing far surpassed the drawing underneath,” Danielle said. “Carter definitely has blossomed with his particular look.”

What began at home as a craft has already taken 11-year-old Carter places. He’s shown his work twice in Bowmanville for the annual Picasso’s Picnic, a youth art fair at which he is a vendor, as well as at the Beaches Wellness Centre on Queen Street East, where he has displayed his art multiple times.

Carter and Danielle were back at the clinic again on Tuesday, Nov. 21, shortly after his acrylic-on-canvas paintings had been set up in a window display, where they will remain through December.

“This is the only painting that I have that’s not an animal,” he said, holding up an impressionist landscape inspired by one of his influences, Bob Ross.

Carter has spent hours watching Ross, the American painter and host of the popular art-instruction program The Joy of Painting. Few other artists get mention. “I’m not really fond of the history of the artists,” Carter said.

He is familiar with the big names, such as Pablo Picasso, but beyond Ross the only artist he counted as an influence was one he knows personally: his mother. She taught him basics, including painting from darkest to lightest. “I give him the fundamentals, but he has gone with it and has his own style, for sure,” said Danielle.

The master has become the protege in some ways. “I’ve actually learned more from him than he’s probably learned from me,” said Danielle. From Carter, she has learned not to sweat perfecting specific details in a piece, to take a more relaxed approach. “He’s got a style that is not at all like mine. It is very loose… and I’m more of a stickler for details.”

Half  the proceeds from the art sales at Beach Wellness Centre will be donated to Second Harvest, an organization that seeks to save food from landfills by working with farmers and retailers to reduce waste. His previous display over Thanksgiving raised more than $600 for Soper Creek Wildlife Reserve.

“Carter’s just such a generous person he always donates half of it to a charity of his choice,” Danielle said.

She isn’t the only one who has noticed Carter’s charitable activity. On Nov. 30, he is set to receive Second Harvest’s Ian Lawson Von Toch Award for Youth Kindness.

Those interested in a Carter original can email carterward2006@gmail.com to commission a painting or visit the Beach Wellness Centre at 2130 Queen St. E. to view his latest works.

Very impressed with your young mans talent . Will certainly check to see his work at Beaches Wellness. Good job Danielle and Trent. Best wishes to you all. Mrs. Groves