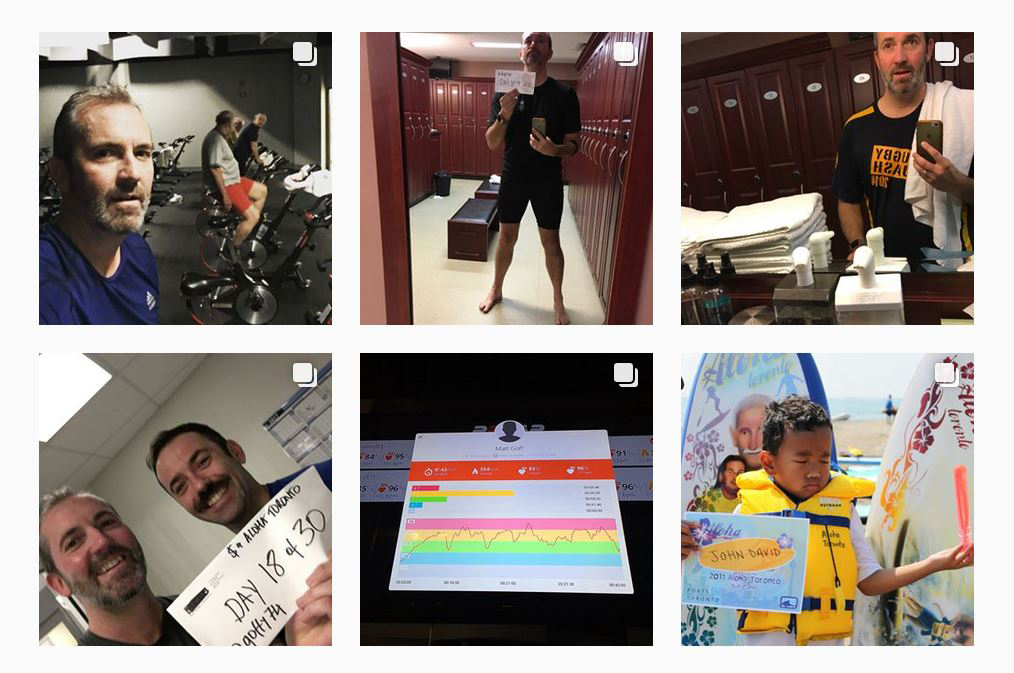 When Beach resident Matt Goff won his golf pool this past summer, he knew there were plenty of ways he could spend his $1,000 winnings.

But instead of pumping it into his mortgage or socking it away for a vacation, Goff decided to reinvest it in the community he’s called home for 16 years and drive more donations by entering into a friendly wager with himself.

Goff challenged himself to complete 30 days of spin class (an indoor cycling exercise class) this November as a way to raise awareness for autism spectrum disorder and leverage his winnings into a larger donation for the local non-profit, Aloha Toronto.

“An organization like Aloha relies on donations and volunteers,” he said, adding that he wanted to donate and raise awareness for a cause “right on my doorstep.”

He is also acquainted with Helen Hatzis, the founder of Aloha Toronto.

“Of all the causes that are out there, I thought, this is a local one, this is someone that I know who has experienced the ups and the downs of what it’s like,” he said. “With autism, the more I read about it, to try to learn more about the different circumstances, just how little we know about it. There is no cure, there’s a lot of missed early diagnosis that could make a difference to kids, and I think the more we do to raise awareness and potentially raise more public funding would be fantastic.”

Goff will complete the challenge Nov. 30 and is on track to have raised $3,000 for Aloha Toronto. He’s tapping into the support of his community in Toronto, back home in England, where he grew up, and his international network of friends to triple the initial $1,000 donation. By documenting his story on Instagram, and tying dollars to “likes” he’s leveraging the power of social media and inviting the public to follow along.

Active in volleyball and squash at the Balmy Beach Club, the physical nature of the challenge hasn’t been “too bad” aside from some sore knees at the start. Goff chose spin over other exercises because he enjoys biking, has been nursing chronic tennis elbow, and “hates running.” The fitness gym he’s been attending on Lakeshore, Mayfair, is on his commute to work, and the instructors have been “all about it.” They’ve opened the class to Goff’s supporters for his final ride on the 30th.

For Goff, this is just the beginning. The experience has been a lesson in the importance of choosing to give back — something he wished he’d done more of earlier in life.

“On a personal level, we all get caught up in our own life and our own routine, and for most of us we are incredibly lucky,” he said. “We waste a lot of money on stuff we don’t need. I’m a culprit of that. If you think about that in terms of donations to a worthy cause, that money that we waste could be a big help to people. I want to do something each year that will galvanize me to do something in a volunteer capacity. This is something that I wish I’d done in my younger man days.”