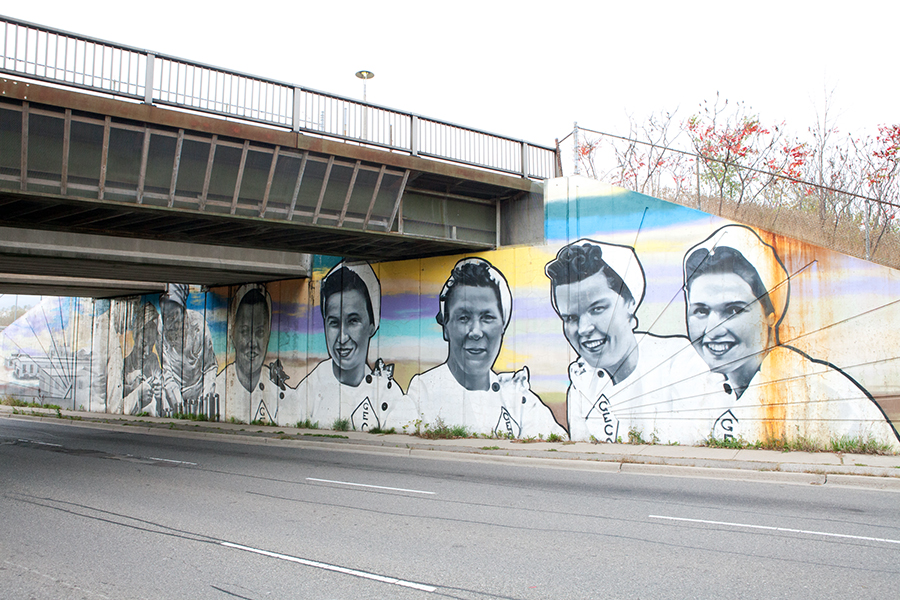 In 2014, the Bomb Girls and GECO were honoured with a mural under the railway bridge on the north side of St. Clair Ave. E, just east of Warden. PHOTO: Phil Lameira

On Jan. 27, 1941 George VI issued a decree which would help to win the Second World War, save the lives of Canadian soldiers, and affect over 21,000 people in Scarborough and the east end of Toronto, most of whom were women.

The order appropriated 350 acres of farmland between Warden and Birchmount, from Eglinton south to Hymus (north of St. Clair Ave. E). This would be transformed into the top secret and largest munitions factory in Canada.

The story of GECO (pronounced Gee-ko) is recounted in Bomb Girls: Trading Aprons for Ammo, published in 2015. Author Barbara Dickson spent over 10 years researching the company and its employees, who risked their lives preparing ammunition for Canadian soldiers on the battlefields of Europe and North Africa. These workers would be in their 90s now, and Barbara was able to interview many before they passed on. She hoped to honour their stories and pay the respect due for their invaluable contributions.

By late 1940 the supply of ammunition for the Canadian Army was beginning to falter. C.E. Howe, the minister responsible for Munitions and Supply, commissioned the Hamilton brothers to set up a plant in Scarborough. Robert and Philip Hamilton, owners of a successful mining operation, General Engineering Company (GECO), replicated a successful First World War factory in England, and imported experts and managers to help run it as there were no Canadians with those skills available.

Such was the urgency that only 10 days after King George’s decree, workers began blasting through two feet of frost on the site. Working around the clock, over 2,000 men constructed 173 buildings connected by two and half miles of underground tunnels for utilities and moving munitions, and overhead galleries for staff to walk to one of the workshops, depending on which of the 41 types of fuses they were handling. Four months after construction began, the first trainees started work.

The site was split into two sections—the dirty (or contaminated) side at the Eglinton end, and the clean side where work of loading gunpowder or the highly explosive tetryl into narrow fuses took place. Women staff soon outnumbered the men nine to one. Their smaller agile hands made them preferred workers. Some were there to support their menfolk at the front, and others were keen to do their part in bringing victory to the allies.

While the main purpose of GECO was to get as many top quality munitions to the fighting soldiers as quickly as possible, the Hamiltons aimed to provide a humane safe environment, and keep a motivated workforce. The work-sheds were far enough apart that if one blew up, it would not affect other buildings, and despite the risks, in the four years of operation there were no explosions. Staff were obliged to change in the dirty section, and take nothing that could ignite into the clean section. (Anyone caught with matches on the clean side could be fined $100 and spend a month in jail.) Safety notices were plastered throughout the site.

The company magazine both praised and cajoled “the girls behind the boys behind the guns,” and published stories, poems and cartoons to encourage them.

Everyone who worked there swore an oath under the Official Secrets Act not to reveal what was going on, and could have been imprisoned for doing so.

GECO was out in the country, four miles from public transit. The Hamiltons hired a fleet of private buses to transport employees from pick-up points at Danforth and Coxwell, Danforth and Dawes, Kingston and Main, Kingston and Victoria Park, and locations closer to Yonge Street. The plant operated six days a week with three shifts working around the clock. For many women it was a 10- or 11-hour day counting travel time.

There were usually about 5,000 workers, but despite the efforts of the Hamiltons, there was a turnover in staff, and approximately 21,000 people were hired over the four years of operation.

When GECO closed at the end of the Second World War, the buildings were decontaminated and used to temporarily house returning troops and their families. Nowadays, the area is an industrial park with small factories. If you drive around there, you can still see some of the original work-sheds, temporary buildings that were put up to last five years, and have survived for over seven decades. Some buildings still have access to the tunnels.

In 2014 the Bomb Girls and GECO were honoured with a mural under the railway bridge on the north side of St. Clair Ave. E , just east of Warden.

There is so much more to learn about local history in Bomb Girls: Trading Aprons for Ammo. The 288-page book is published by Dundurn Press and is available at Amazon, Indigo, Chapters, and some Coles bookshops.

Barbara is writing a sequel that will include 70-100 inspiring Bomb Girl stories, and is currently conducting interviews. If you have a tale to share, you can reach her at www.barbaradickson.ca. She is also available for speaking engagements. See the website for details.

Bomb Girls: A Documentary was released this month on Bell Fibe TV1 Channels 1 and 1001. It includes interviews with Barbara Dickson, along with wartime footage of construction at GECO, the secret tunnels, the dangerous fuse-filing operations, and interviews with five of the Bomb Girls.

Lois McCabe is third from the left in the back row of this picture taken at GECO.

The women are wearing their close-fitting work clothes, styled to avoid collecting ammunition dust. Any tresses that slipped out of the turbans could temporarily turn yellow depending on which chemicals the woman was handling.

Lois was hired at GECO when she was 16. Six days a week she left her Beach home and took public transit to Danforth and Dawes, where she had a free ride on a company bus to the main entrance on Eglinton. She went through security and clocked in. She was in the dirty side of the plant.

In one of the women’s changing rooms, she stripped down to her socks and cotton underwear, with the metal clasps on her bra replaced by buttons, laces or elastic. She left all her possessions in a locker including hairpins, nail polish, and cash–—anything that was not needed in her job. She was checked by a matron before being allowed to step over a two-foot bench into the clean side of the plant. There she put on her uniform with her name and employee number on the blouse, and leather work shoes with soles that were glued on instead of nailed.

Lois walked along one of the galleries directly to her workshop. No one was allowed to linger or wander into a place she had no reason to be.

During the eight-hour shift, she had two 10-minute breaks. Hot and cold drinks were sold at a counter in one of the galleries, but staff had to purchase tickets in the cafeteria earlier as no coins (metal) were allowed on the clean side. Lois also had an hour break for breakfast, lunch or supper, depending on her rotating shift, and for 25 cents could buy a hot wholesome meal in the cafeteria. Her work was repetitive as the fuse filing had been broken down into around 100 steps, of which she only did one, but she enjoyed the intricate work where everything had to be exact. Sometimes the women sang the popular tunes of the day as they worked.

At the end of of her shift, she returned to the clean section and stepped out of her uniform. If it was still clean, it was hung up to air on hooks suspended from the ceiling. If it was soiled it was sent to the on-site laundry to be washed and pressed ready for the next day. She moved back into the dirty area, dressed in her own clothes, signed out at Security, took the bus to Danforth and Dawes, and then made her way back to the home she had left almost 11 hours earlier.

Lois told her daughter, Nancy Culver, that she enjoyed working at GECO, and never felt in danger because the employees were constantly reminded to adhere to the safety regulations in place. She felt she was doing her part for the war effort, and was paid more than she could have earned elsewhere.

After the war Lois switched from making bombs to making chocolates at the Laura Secord Company. In 1951 she married Al Kerr, who had been a radio operator and gunner on a Lancaster Bomber. Nancy said that her mother seldom talked about her war days, and that her father never did.

Florence Hargreaves Ignatieff: A woman in charge at GECO

There was one woman who stood out from the thousands that worked at GECO.

Florence Hargreaves Ignatieff had an undergraduate degree in Home Economics and a Masters Degree in Biochemistry. She was persuaded by the Hamilton brothers to leave the T. Eaton Company, where she managed the food operation at the Georgian Room, to head up their non-profit catering division.

Under her leadership, 65,000 meals were prepared each month. She and the Hamiltons ensured that the food was fresh, nourishing, attractively presented and reasonably priced.

Much of it came from nearby farms and could be on the table almost as soon as it was picked. She was by far the most highly-paid woman on the site, and reported directly to the Hamiltons.

When Henry Ford visited the plant, he offered her $40,000 to manage food operations for the Ford Empire, which she declined.

Like many other GECO women, Florence was married with young children.

The family lived in one of six bungalows on the northwest edge of the property along with a housekeeper. She was on 24-hour call.

Her husband, Count Vladimir Ignatieff, who came from a family of aristocratic Russian immigrants, was a chemical war specialist serving in Europe as a major with the Calgary Highlanders.

After the war the Ignatieffs purchased a 400-acre farm with 200 purebred cattle in Quebec, which Florence ran for five years while her husband worked in Washington with the United Nation’s Food and Agriculture Organization.

When the FAO moved to Europe, so did the Ignatieffs. It did not encourage the wives of its senior staff to work, and Florence deferred to her husband’s career and stayed in the shadows.

The name Ignatieff was prominently in the news from 2008 to 2011 when their nephew, Michael, headed the Federal Liberal Party and was leader of the official opposition.

Author and snowbird Sheila Blinoff retired from the Beach Metro News in 2013 after 40 years of service.