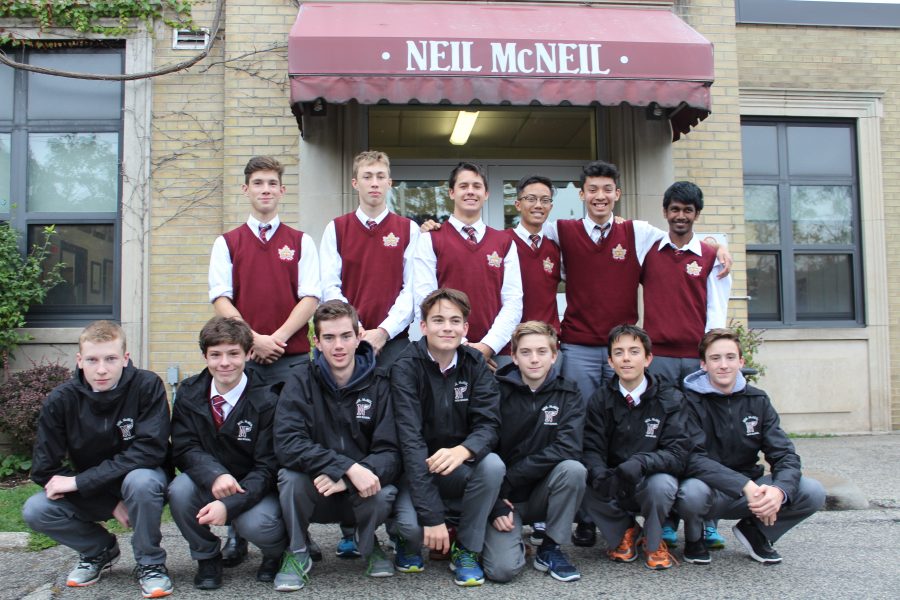 Members of the 2017 Neil McNeil Catholic High School cross-country team in front of their school on Nov. 2, 2017. PHOTO: Josh Sherman

“It really brought me closer together with my team and friends, and it’s kind of sad that this sport is ending now,” said Luis Santamaria, Grade 12 captain of the all-boys team. “But at least I could look forward to the track season.”

The finals took place on Oct. 27 at Etobicoke’s Centennial Stadium.The team’s overall victory, which was based on a cumulative score of 28 out of 30 from the performances of the midget, junior and senior groups, was Neil McNeil’s 10th-straight title at the annual championship.

The Grade 9 juniors tied for first but lost in a tie-breaker, while the Grade 10 Juniors and Grades 11 and 12 seniors took gold in their respective races.

Coach Ashley Masterson has been with Neil McNeil for all 10 TDCAA championships. She credited the work of other coaches, including her father, Steve, with helping building a legacy of success. “We get great kids,” she added. “They say success breeds success.”

The cross country season isn’t finished quite yet for the Santamaria-captained squad. The team will be competing in the OFSAA provincial championships this weekend in Petawawa, Ont.

Coach Jason Wood, who has coached the team to seven TDCAA titles, noted a lot of work “has already been put in” in terms of the team’s physical fitness but that there are still preparations to be made.

“This week is more of a maintenance-type of week for us, working on a little bit of speed and mostly working on the mental aspect—getting ready to compete against the best of the best across the province,” said Wood.

Santamaria is trying not to “stress about” the big day. “You want to try to keep a cool mind and have faith, because we’ve put in all this work. It’s time to I guess reap the rewards again now.”

Meantime, Grade 12 team member Ibrahim Kedir is vying for a top-three finish, he said. “I’ve been training all year pretty hard for this,” he said.