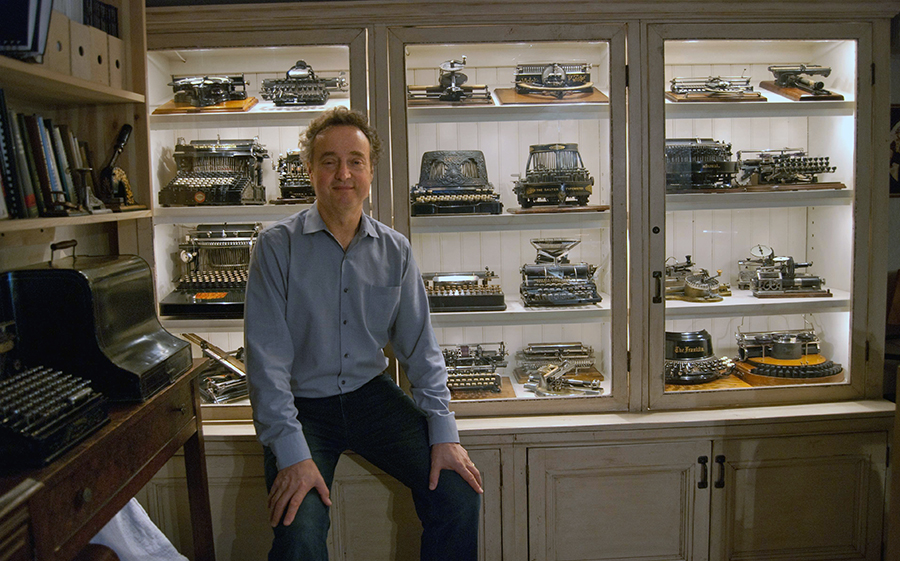 Martin Howard with his collection of antique typewriters at his home in Birch Cliff. PHOTO: Contributed

“Tom Hanks is a natural on camera,” quips Birch Cliff resident Martin Howard during a recent conversation at a local coffee shop.

“Sam Shepard waxes poetically… he makes the hair stand up on the back of my neck,” he adds. “Pure magic.”

The local antique typewriter aficionado is speaking about his co-stars in the quirky and critically-acclaimed documentary California Typewriter, directed by Doug Nichol. The film begins its Canadian release at the Hot Docs Ted Rogers Cinema on Bloor Street Oct. 27.

Howard, Hanks, Shepard, and two guys with the last name Mayer (only one of them ultra-famous), are amongst the film’s subjects, all of whom hold a passion and reverence for manual typewriters.

Howard owns about 80 typewriters, all unique machines from the 1880s and 1890s. That time period was the “wild west” of typewriter design, says Howard, before the turn of the century when the machines began to take a more familiar shape.

Howard loves sharing his machines with the public and has exhibited at numerous museums and conventions, with plans for an upcoming show partnered with George Brown College. Last year, closer to home, an exhibit featuring photographs of the machines by former Beach Metro News editor Jon Muldoon graced the Great Escape Bookstore Annex.

The film, which premiered at the Telluride Film Festival, follows Howard on his quest for a rare Remington typewriter, essentially the Remington 1. “I have rarer machines, but this is still rare and highly sought after,” he said.

Howard and the other non-famous subjects – one, the owner of a shop called California Typewriter, where the film gets its name and where a delightful “type-in” is held – are the glue of the film, while Hanks, the late Shepard, John Mayer and David McCullough add some star power.

“There’s no weak links here,” said Howard. “They speak beautifully about how a typewriter is a special tool for them.”

Telling are the differences between the subjects’ use of a similar tool. Howard, for example, only collects typewriters – he doesn’t use them to produce letters or work. “I love my Mac computer,” he said. But others can only create on a typewriter, or collect machines from different time periods.

An understanding and acceptance of the varying role of typewriters and other more modern tools is at the heart of the film.

“The film isn’t suggesting that you get rid of your computers and iPhones,” said Howard. “The typewriter is a metaphor, in a broad sense, for analog versus digital, vinyl versus digital music… It’s saying you don’t have to be totally focused on the rush of digital evolution that’s rushing towards you, you can take what you want from the old world, the touching world.”

Beyond the philosophical, “the message of the film is really uplifting,” says Howard. “Everyone in the movie is so thrilled with what they do, that mood is really infectious.”

Howard thanks director Nichol for that mood, noting how comfortable he made Howard feel during filming.

“I had faith he’d handle me well,” he said. “I could just really be myself and he encouraged my enthusiasm, which is never far below the surface.”

Spend time speaking with Howard about typewriters, and you’ll agree.

Better yet, join him for a Q&A after the 7:30 p.m. screenings of the film on Oct. 27 and 28 at the Hot Doc Ted Rogers Cinema (formerly the Bloor Street Cinema), 506 Bloor St. W. More screenings can be found at the theatre’s website www.hocdocs.ca. The film will be screening at The Fox on Queen Street East at a to be determined date. To contact Howard and view his collection of typewriters, visit his website at www.antiquetypewriters.com.