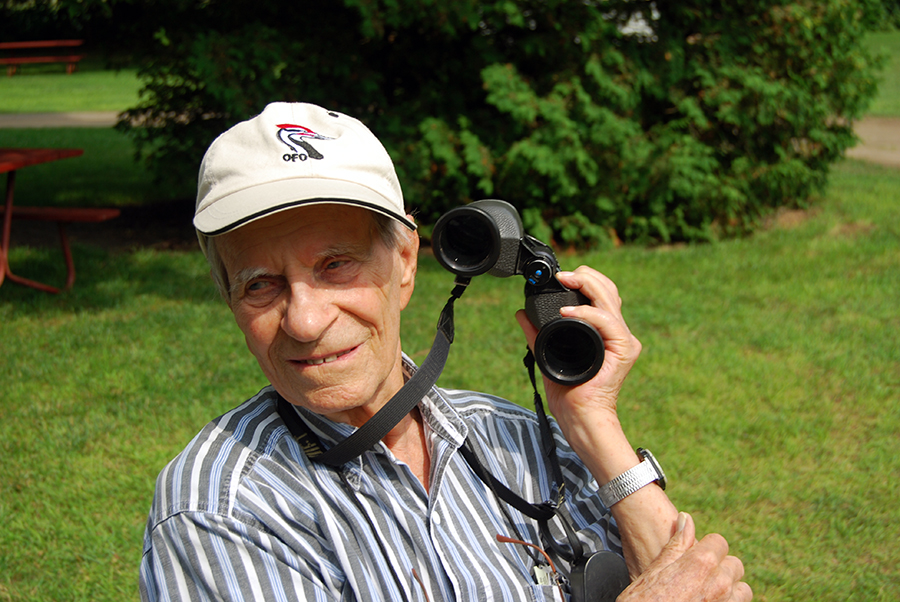 Fred Bodsworth was an explorer and nature-lover throughout his entire life. PHOTO: Courtesy of the Bodsworth family

“Out of the blending of human and animal stories comes the theme that I hope is inherent in all my books: that man is an inescapable part of all nature, that its welfare is his welfare, that to survive, he cannot continue acting and regarding himself as a spectator looking on from somewhere else.”

Long-time Beach resident Fred Bodsworth was a man ahead of his time. As a journalist, author and naturalist, he reminded us that we have only one fragile home: planet earth. His writing was a wake-up call to all of us. We abuse the environment around us at our peril as fossil fuels contribute to climate change, drought, flooding, rising ocean temperatures and catastrophic storms.

Bodsworth was born in Port Burwell, Ont. on Oct. 11, 1918. He grew up with a passion for nature, particularly birds. Our feathered friends really are the proverbial “canary in the coal mine” warning us of danger ahead as we destroy natural habitats and push species to the brink of extinction.

In 1944, Fred married Margaret Banner and they raised three children in a rambling house on Beech Avenue near Kingston Road. He was inspired to write his first novel in 1955 after reading a report of two Eskimo Curlews in Texas: “What if they were the last pair on Earth?” (Why do we still say “kill two birds with one stone”?)

Last of the Curlews sold over 3 million copies and in 1972 was adapted into a one-hour film for television which won an Emmy Award for children’s broadcasting. In those days the animation was hand-drawn and thankfully the birds didn’t talk and crack jokes. The cautionary tale helped teach young people about wildlife conservation while giving them a sense of wonder at the beauty and strength of nature.

The curlews were once so numerous that flocks of the shorebirds darkened the sky as they migrated every year on an epic journey from the Arctic tundra to Patagonia in South America and back to their nesting grounds in the Land of the Midnight Sun. Would they be hunted to extinction like the passenger pigeon before them?

CBC radio host Tom Allen has created a theatrical adaptation of Bodsworth’s heart-breaking novel. The Last Curlew, part of the Kingston Road Village Concert Series, will be performed at Kingston Road United Church on Sunday, Oct. 15 at 1:30 p.m. The concert weaves together live music, storytelling and dance and is on the heels of the related Beaches Reads event, an Oct. 3 discussion of Bodsworth’s novel.

Allen was kind enough to answer my questions about the performance. I wondered what brought him to this piece. How was he able to interpret a story about migratory birds?

Allen: The Last of the Curlews was one of my parents’ beloved books. That is how I came to know it. We tell the story with two actors: a grandfather (Grandpa) and his teenaged granddaughter (Dearie). The story is set in a century or so into the future, in a society that has continued to place preservation and respect for the natural world as an increasingly low priority. Grandpa has convinced Dearie to come with him on his annual trek through the woods to the place where, generations earlier, an Eskimo Curlew was seen. In the course of the hike he relates to her the story of that remarkable bird’s harrowing migration, and its search for a mate.

BF: I like that Bodsworth didn’t give his birds human attributes in a Disney way.

Allen: I, like you, admired how Bodsworth never attached human characteristics to his protagonist, but I also loved how he was still taken in by the pathos of the situation. I always felt I could feel him getting drawn in by the romance of the story, consciously pulling himself back to objectivity, and then getting drawn in again. I tried to do that, as well, in my adaptation.

BF: How does the music convey the feelings of the story?

Allen: This story is regularly punctuated with music and dance that reflects the loneliness of the bird’s journey, the danger, the astonishing athleticism, as well as the yearning felt by both Grandpa and Dearie, and their attempts to understand this remarkable creature, and to come to terms with his fate.

BF: Who will be performing on October 15?

Allen: I play the part of Grandpa. Dearie is played by the young actor and filmmaker Annika Broadhead. Music is provided by harpist Lori Gemmell (Kitchener-Waterloo Symphony Orchestra) and violinist Etsuko Kimura (Toronto Symphony Orchestra). The dancer and choreographer is Julia Aplin.

Note: If you are interested in the goal of saving endangered species, there is a talk “Out of the Depths: Blue Whales Research at the ROM” at Main Street Library on Monday, Oct. 18 at 6:30 p.m. For more programs visit www.tpl.ca/fragileplanet.

“Don’t it always seem to go

That you don’t know what you’ve got ‘til it’s gone.

And put up a parking lot.

I don’t care about spots on my apples

Leave me the birds and the bees.