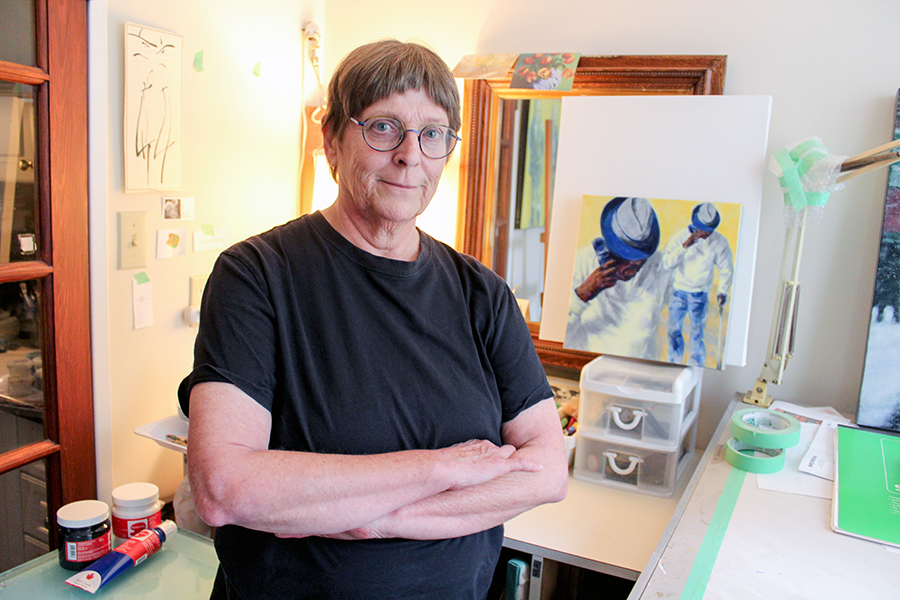 Beach Guild of Fine Arts artist Donna Gordon at her home studio. Gordon is driven by design, with work that pops with movement and colour. PHOTO: Anna Killen

Beach Guild of Fine Arts painter Donna Gordon has known she wanted to be an artist from the time she was a child growing up in North Toronto.

“I’ve been doing art all of my life,” she said, speaking at her home studio on Kingston Road near Waverly earlier this month. “I knew I was going to OCA (Ontario College of Art) when I was in grade school.”

Gordon had a family that was supportive of her artistic dreams, including an uncle who had made a living in design and advertising. A good thing, because she loved spending time in her room drawing.

Her family’s encouragement and her natural passion led her to art school, where she honed her craft. After graduation, she worked for over 25 years as a commercial illustrator.

It was during that phase of her career where she first met Shelley Cinnamon, the president of the Beach Guild of Fine Art, who was then at Harlequin. Gordon worked on illustrations for the publishing company.

About seven years ago, now back on land in the neighbourhood after many years living on a boat docked at Cathedral Bluffs Park, Gordon would run into Cinnamon again, this time at the Guild’s annual spring show. That chance meeting would help solidify Gordon’s interest in joining the Beach Guild.

Gordon joined the artists group, founded in 1994 as a way for local artists to support each other, and found her artistic practice opened up. While she had been working in air brush as an illustrator, during a group activity at a Beach Guild meeting she realized she would like to start painting in acrylic.

“I was hooked,” she said. “Totally different media. I hadn’t used it since OCA… and I discovered you can do things with it that I didn’t even know.”

That discovery and drive to try new things is apparent in Gordon’s work. She doesn’t like to paint the same thing twice, and is constantly looking to evolve and find new subject matter.

“I don’t like to do the same thing twice,” she said.

“If I do something that I think is fairly successful, I don’t want to paint the same thing again. I want to try something new.”

That can lead to eclectic shows, she said.

“I had a show a few years ago, and I looked at it and thought, ‘This looks like a group show,’” she said, laughing.

Gordon has been part of a number of shows over the years, and is newly represented by Yellow House Gallery after showing work at the gallery’s group shows. This weekend, Sept. 22 to 24, she joins nearly 40 of her fellow Beach Guild artists at their annual fall show at the Beach United Church.

The support she receives from the Beach Guild helps her work and complements her eagerness to learn more.

“There’s different levels and different experiences,” she said. “We have professionals in the Guild as well as people who are just starting out – their motivation is to learn more.”

Gordon is excited by the work of the new members, and points out the work of established members Cinnamon, Yvonne Jamieson, Joyce Nelson and Shirley Jones as artists whose work she admires.

“Shirley Jones, she just nails stuff,” said Gordon. “I don’t know how she does it. Her skill at painting, and especially at watercolour.”

Mingle with Gordon and other members of The Beach Guild of Fine Art at the 14th Annual Fall Show at the Beach United Church, 140 Wineva Ave.